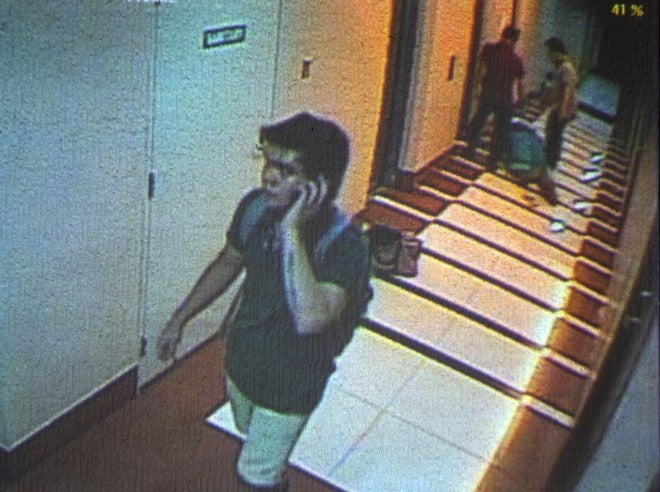 The search for the prime suspect in the death of hazing victim Guillo Servando led authorities to a Makati City subdivision on Friday, but authorities came up empty-handed since their target had gone missing a day after the fraternity neophyte died.

Cody Errol Morales, 22, Lord GT (Grand Triskelion) of the Tau Gamma Phi chapter at De La Salle–College of St. Benilde (DLS-CSB), left home on June 29 and had not returned since, according to senior agent Joey Ajero of the NBI-Death Investigation Division, who led a team that served a subpoena at Morales’ residence in Magallanes Village.

“We issued the subpoena to get his statement about his participation in the initiation rites, but we were told by the maid who accepted the letter  that Morales had yet to return after leaving the house last Sunday,” Ajero told Inquirer.

The NBI agent also said they had also obtained the real names of two other suspects: Daniel Paul Cruz Bautista (who was earlier named by the Makati police as Pope Bautista), and Kurt Michael Almazan (earlier mentioned merely as Kurt).

Ajero, who had met with DLS-CSB officials and secured their cooperation in the investigation, said some of the participants in the June 28 hazing rites continued to attend their classes even after the incident.

Also on Friday, the chief of the Makati City police disclosed that five suspects had expressed willingness to surrender.

Senior Supt. Manuel Lukban said he had talked to the “representatives” of five members of the Tau Gamma Phi, whose initiation rites led to Servando’s death and sent three other neophytes to the hospital.

“In my communication with their representatives, the members are trying to encourage their other members to join them in surrendering and apologize for the incident,” Lukban said in a press briefing at Camp Crame.

According to Lukban, the fraternity members expressed willingness to own up to their mistake, and that he assured the suspects that they would be  protected from harm and treated like any other detainee once they turn themselves in.

He said the Makati police had taken statements from Aurelio Servando, father of the 18-year-old victim. The three other students from DLS-CSB—John Paul Raval, 18; Lorenze Agustin, 18; and a 17-year-old minor—remain in the hospital after taking a severe beating.

“(The other) victims have not yet fully recovered and cannot give their statements. We understand that and we don’t want to pressure them,” Lukban said, adding that they hope to file a case by next week.

On Thursday, however, case investigator SPO1 Nilo Sadsad said Raval had already identified some of the suspects, namely Morales; Bautista, who is the frat secretary; and a man known only as “Emeng,” the master initiator.

The other frat men linked to the hazing were identified by Raval as Navoa, Rey Jay, Mike, and Louie.

Meanwhile, a Supreme Court magistrate known for his strong stance against fraternity violence took to the social media to note the “silence” of concerned officials regarding hazing cases.

In a series of posts on Twitter, Associate Justice Marvic Leonen said: “No victim of violent crime chooses to be victim. But we contribute to an environment that creates the perpetrator by our silence. Wise men know this: Brotherhood is earned, it is not produced by inflicting harm on the other. Teach this to our sons and daughters.

“Impunity for violence thrives in a climate of unjustified silence and illicit transactions sub rosa (in secrecy). The next victim can be your own son.”

Leonen’s posts did not make a direct reference to any person or school, but his tweets came on the day the Inquirer reported that a 17-year-old student of the University of the Philippines spent a week at the hospital for injuries sustained during the initiation rites of Upsilon Sigma Phi fraternity.

Sources said the student was discharged from the hospital on June 23. The Upsilon hazing, which took place in Quezon City, happened days before the Tau Gamma Phi initiation rites that led to Servando’s death.

The administration of UP Diliman, Leonen’s alma mater, confirmed on Thursday that there was a “fraternity incident” but did not give details, saying the victim’s family had requested privacy and that an investigation was still going on. With a report from Tarra Quismundo

Read Next
5 arrested in another Tau Gamma Phi hazing
EDITORS' PICK
Look Through: The fate of impounded stray dogs
House energy committee chair Arroyo bats for cheap electricity
What to watch out for when selecting a video surveillance solution
23,000 cops to be deployed nationwide for school reopening
Unleash the photographer in you this World Photography Day with vivo smartphones
DOH says COVID-19 cases plateauing, but public shouldn’t be ‘complacent’
MOST READ
Sharon Cuneta asks for prayers for friend in ICU who suffered silent stroke
Light therapy could be the answer to your sleep problems
Korina Sanchez reunites with former ABS-CBN co-anchors Julius Babao, Cheryl Cosim
PBA: San Miguel ousts Meralco to arrange finals duel vs TNT
Don't miss out on the latest news and information.