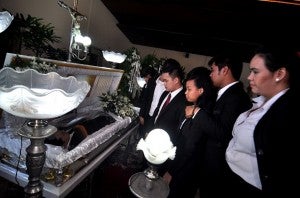 Servando’s father, Aurelio, on Thursday went to the Makati police to monitor the turnover of the case and the pieces of evidence but lamented that the investigation was “quite slow for a father of a child who was killed.”

Speaking to reporters, Chief Senior Superintendent Manuel Lucban of the Makati City Police  said there was a delay in the filing of cases because they were still collaborating the statements of all the victims and suspects.

Although the two other victims were now out of danger, he said “the victims have not fully recovered.”

He added that at least five of the 14 suspects have willingness to cooperate with the police to shed light on the investigation.

According to him, the suspects’ parents said their children are willing to accept their fate and would like to extend their apologies.

He said no hold departure order has been issued against the suspects, citing they would have to file the necessary charges next week.

A brotherhood of violence

Read Next
Who will benefit most if Aquino is impeached? Cayetano has answer
EDITORS' PICK
Duterte to issue memo on face shields this week
Smart brings KCON:TACT especially 4U to subscribers from June 19 to 27
Gilas out to prove Korea win not a fluke; Tab fires back at ‘lucky shot’ remark
Young, Huerter help Hawks upset top seed Sixers in Game 7
DOH reports 40 more COVID-19 variant cases
Smart celebrates all kinds of ‘#SimplyLove’ for Pride Month
MOST READ
No plot to oust Pacquiao as PDP-Laban president in July meeting — Nograles
Duterte to issue memo on face shields this week
Probe troll farms, lawmakers urge
Handcuffed for 123 days, Ukraine couple splits
Don't miss out on the latest news and information.