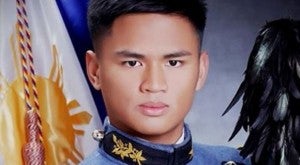 President Benigno Aquino III finally came out with a decision on Cudia months after the investigating board of the PMA submitted their final report to him.

A letter by Executive Secretary Paquito Ochoa addressed to Cudia’s parents dated June 11 that was obtained by INQUIRER.net stated that Aquino sustains the recommendation of the Armed Forces of the Philippines and PMA Cadet Review Appeals Board (CRAB), which is not to allow Cudia to graduate from the revered military institution.

Cudia was expelled at the PMA during his senior year after he allegedly lied as to why he was late for class. Lying is a violation in the academy, where there is a strict implementation of the Honor Code that says “one must not lie, cheat and steal nor tolerate those who do.”  His sister publicized his plight on Facebook.

Cudia’s camp accused it was an 8-1 voting that later became a 9-0. A unanimous vote by the Honor Committee, also composed of cadets, is required to dismiss a cadet facing an Honor Code violation.

A Navy officer, Commander Junjie Tabuada, also backed Cudia. He said in an affidavit that there was pressure on the Honor Committee member who initially voted against the cadet’s dismissal.

Aquino, who is also Commander-in-Chief, ordered a review of the case. Cudia was not able to join the graduating class of PMA Class of 2014 where he was supposed to be salutatorian.

Cudia’s family also took the cadet’s case to the Supreme Court but their petition to stop his dismissal was denied by the High Court. 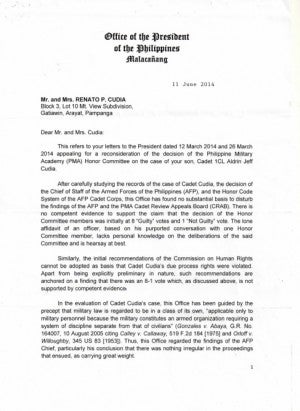 An investigation by the Commission on Human Rights revealed that the investigating team was biased against Cudia and concluded that it was a “sham trial.” They also recommended the filing of cases against some of the Honor Committee members in Cudia’s trial. It also asked for a review of the PMA’s Honor Code.

“After carefully studying the records of Cadet Cudia, the decision of the Chief of Staff of the Armed Forces of the Philippines (AFP), and the Honor Code System of the AFP Cadet Corps, this Office has found no substantial basis to disturb the findings of the AFP and the PMA [CRAB]. There is no competent evidence to support the claim that the decision of the Honor Committee members was initially at 8 “Guilty” votes and 1 “Not Guilty” vote. The lone affidavit of an officer, based on his purported conversation with one Honor Committee member, lacks personal knowledge on the deliberations of the said Committee and is hearsay at best,” Ochoa’s letter read.

“Similarly, the initial recommendations of the Commission on Human Rights cannot be adopted as basis that Cadet Cudia’s due process rights were violated. Apart from being explicitly preliminary in nature, such recommendations are anchored on a finding that there was an 8-1 vote which, as discussed above, is not supported by competent evidence,” the letter read further.

“In the evaluation of Cadet Cudia’s case, this Office has been guided by the precept that military law is regarded to be in a class of its own, applicable only to military personnel because the military constitutes an armed organization requiring a system of discipline separate from that of civilians,” Ochoa also said.

“Thus, this Office regarded the findings of the AFP Chief, particularly his conclusion that there was nothing irregular in the proceedings that ensued, as carrying great weight,” he added.

Military spokesperson Lieutenant Colonel Ramon Zagala, meanwhile, said that Aquino’s decision to back the recommendations of the AFP and PMA “manifests that due process was given to Cudia.”

“We hope that the decision will give closure to the case of Cadet Cudia,” he told INQUIRER.net by phone.

Cudia, dismissed for lying, got 99% in conduct