A symphony of trees in Pangasinan town 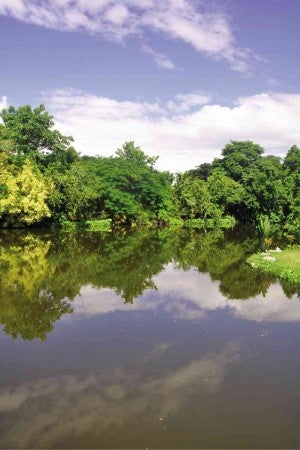 THE ARBORETUM in Natividad, Pangasinan province, where some of the country’s indigenous and endangered tree species now thrive. WILLIE LOMIBAO/CONTRIBUTOR

NATIVIDAD, Pangasinan—The scene seems to leap out of a painting: A group of musicians plays classical pieces on a lawn carpeted by grass. Behind them is a pond framed by tall trees and where ducks gracefully swim.

But an afternoon drizzle on Saturday forced the musicians to stop playing, fearful that the instruments would get soaked by the rain. The “Concert by the Pond,” as it is called by former Environment Secretary Victor Ramos, was transferred to his rest house here, where local church choir members were treated to a delightful mix of classical and modern music rendered on strings.

The concert, staged by Orchestra of the Filipino Youth, was a perfect introduction to Ramos’ arboretum (collection of trees) to the public—with the mini-forest turning more enchanting with each note.

The 4-hectare arboretum in Rizal village in this agricultural town in eastern Pangasinan province boasts of at least 200 species of indigenous forest trees.

Ramos, who toured the Inquirer around the farm, was like a proud father introducing each tree, its characteristics and peculiarities—how tall they get, how big their trunks are, the shapes and textures of leaves, their uses and medicinal properties.

“Each tree has a role to play,” he said.

“The trunk of this toog (Philippine rosewood) is so hard that it is used as railroad ties (where rails are placed). Loggers refuse to cut them in the forest because they are so heavy that they sink in the river,” he said.

“The mangkono (iron wood) is as tough as iron that it is used as the axle of motorboats. They grow tall but very slowly and are best grown in mined-out areas. This bagras (around 20 meters high) is used as electric posts. The Philippine teak wood was used by the Spaniards to repair their galleons. This dau can live up to a thousand years,” he said.

Then there’s the barabai (Cerbera manghas) whose seeds have poison that can stun fish so they can be easily caught. The barabai seeds, however, are not harmful to humans, Ramos said.

The mini-forest has the lauat tree, whose leaves are used as shampoo and skin moisturizer. There’s also the dapdalo tree, which is being researched by pharmaceutical firms for its antidepressant properties, and the palosanto, which is made into incense.

The mini-forest also has the anubing tree, whose leaves have properties similar to a nylon fabric; bayok, whose leaves change shapes as they mature; Palawan cherry, supa (also known as the “kerosene tree”), putat, tangisang bayawak, guiho, kalantas, dita or dalipara  (which is made into blackboards), apitong, kupang, bungkal, ivory mahogany and kalingag.

Many of the trees are endangered, like the palosapis (Philippine mahogany or white lauan).

Ramos said he started collecting trees in 1995 when he turned 50. Well-wishers gifted him with saplings of native trees. “I brought here a botanist to identify the trees, their scientific names and uses,” he said.

The saplings need care until they are about 1.5 meters tall when their roots are firmly anchored to the ground, he said.

Narra, the country’s national tree, is easily propagated, he said. “You plant it when the rainy season starts and before you know it, you have a tree,” he said.

Ramos, who grew up in San Nicolas town, said his tree farm was carved out from rice fields.

The farm, which also cultures fish and grows organic vegetables, is the fulfillment of his boyhood dream.

He bought the property in 1986 when he retired from a private company and before he joined the government.

He bought the first 2 ha at P75,000 per hectare. He hired an environment architect who told him that the land was not enough for his plan. “So I bought the adjoining 2 ha, but the owner increased the price to P150,000 each hectare,” he said.

Then the hard work started—digging the three ponds of different shapes and sizes, and planting the native trees.

Ramos said the farm welcomed students who wanted to learn about the country’s trees.

“This is my legacy to the community where I come from,” he said.