MANILA, Philippines–Citing a directive from the Department of Finance, the Bureau of Customs has extended its working hours–from 7 a.m. to 7 p.m. seven days a week–in the Manila International Container Port, Port of Manila, the Ninoy Aquino International Airport and in other BOC offices in Southern Tagalog handling shipments of the Philippine Economic Zone Authority (Epza). 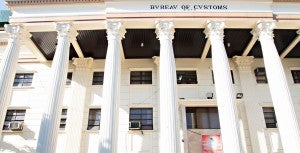 In a statement, the DOF-attached agency said on Tuesday “the extended working hours shall be implemented immediately.”

Finance Secretary Cesar Purisima, in a June 26 order to the BOC, noted the extended operating hours “shall be without prejudice to the determination by (Customs Commissioner John Phillip Sevilla) to further adjust the extended working hours as may be required by the service.”

“The Bureau of Customs shall coordinate with the Land Bank of the Philippines and other relevant banks, if necessary, to ensure that bank services are made available during the times and days mentioned,” said Purisima.

According to the finance department head, the move aims to “provide support to the operations of the economic zones” in the Calabarzon or the Cavite, Laguna, Batangas, Rizal and Quezon region.

Last May, the Bureau of Customs extended its operating hours at the MICP and the POM to address the adverse effects of the Manila city government’s expanded truck ban on the revenue collection efforts of the agency.

BOC collections at the MICP and the POM, two of the country’s biggest ports, are reportedly down by P100 million to P150 million a day due to the truck ban, which has been imposed by Manila City Hall since Feb. 24.

Sevilla has issued a directive authorizing bureau personnel at the two ports to render overtime services seven days a week and even on public holidays when necessary.

Under Customs Memorandum Order No. 09-2014, dated May 8, the bureau’s X-ray units and the Management and Information System Technology Group are also directly involved in the needed extended working hours.

According to Sevilla, the payment of overtime services “shall be charged against savings of the bureau, which may be determined at the end of every quarter by the budget division.”

The revised truck ban has also resulted in longer working hours for employees of the Land Bank and the Development Bank of the Philippines, another state-owned financial institution.