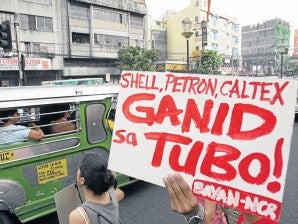 The strike that a militant transport group staged Monday to push for fuel price cuts and to protest the oil deregulation law and a tax on toll fizzled out in Metro Manila and other areas.

“It seemed the protesters were not able to gain support even from their ranks,” said Francis Tolentino, chairman of the Metropolitan Manila Development Authority.

The strike, however, crippled public transportation in a number of towns and cities in the provinces of Laguna, Cavite, Batangas and Quezon in southern Luzon and in the cities of Davao, Iligan and Cagayan de Oro in Mindanao.

Malacañang patted itself on the back for its preparedness in Metro Manila as it assailed the Pinagkaisang Samahan ng mga Tsuper at Operators Nationwide (Piston) and other protesters for “choosing to be part of the problem.”

Only a few people were stranded in a very limited area in Metro Manila because the government did its job, according to Malacañang.

“In Regions 1, 2 and 3, there were no strikes. In Region 4, 11 buses were deployed to ferry stranded commuters en route to San Pedro and Sta. Rosa, Laguna,” presidential spokesperson Edwin Lacierda said at a noontime briefing.

Lacierda said there was no strike in Region 7 as of 7:30 a.m. “In Region 10, there is 40-percent participation, but did not affect the transport,” he said, quoting Transportation Secretary Manuel “Mar” Roxas II.

That was not so in Davao City. Desiderio Cloribel, chief of the Traffic Management Center, said at least 80 percent of public transportation in the city was paralyzed.

Davao City Mayor Sara Duterte distributed P75 worth of breakfast and lunch for each protester and meal allowance for each government employee.

“As much as I sympathize with your plight, there’s nothing that the local government can do because it’s the national government that can do something about it,” the mayor said.

But there was total paralysis of public transportation in Iligan City where militant groups set up choke points in strategic areas.

Only jeepneys plying routes outside the city were on the road. Commuters made do of the few taxis and a throng of bicycles to take them around Iligan City.

The transport strike was hardly felt in the cities of Cotabato, Tagum and Zamboanga.

In Tagum City, Senior Superintendent Edgardo Wycoco, Davao del Norte police chief, said at least 10 percent of the tricycle drivers opted not to ply their routes, “but still the overall situation was normal.”

“Life is hard. We need to work, while we sympathize with our co-drivers nationwide. That is our consensus,” said Benjamin San Diego, a driver for 20 years.

In Laguna, the strike was most felt in Sta. Rosa City and Cabuyao, said the Southern Tagalog Transport Sector Organization (Starter), the local affiliate of Piston.

Rolando Mingo, chair of Starter, said 95 percent of jeepneys, plying the route of San Pedro to Calamba City, passing through Biñan City, Sta. Rosa City and Cabuyao did not ply their routes starting at 8:30 a.m.

Jeepneys from the Balibago terminal in Sta. Rosa joined the strike, paralyzing 95 percent of the routes going to Silang and Tagaytay City in Cavite.

“I had a hard time catching a ride from Cabuyao,” said Ronualdo Tadel, 20, who paid P50 for a special trip on a tricycle to reach Calamba.

“We can say there were a lot (of drivers) who joined today’s strike,” said Alfredo Mendoza of the Calamba police.

Mendoza, who owns two units of passenger jeepneys for his sideline, said he asked his drivers to keep off the streets to sympathize with the drivers.

“It’s OK for them to hold a rally as long as they won’t force the other drivers to join them. So far, we have not had any report of such in Calamba and (the strike) has been peaceful,” Mendoza said.

The regional office of the Land Transportation Franchising and Regulatory Board

(LTFRB) provided two buses that offered free rides to the public in Calamba.

Starter said 80 percent of transportation from Tiaong, Quezon, to Batangas was paralyzed, while militants in the cities of Batangas, Lipa and Tanauan, and in Lemery town held protest rallies.

Public utility buses plying the Manila-south Luzon route did not join the strike. They called off their protest caravan against the toll hikes to help motorists affected by the transport strike.

Batangas Vice Governor Marc Leviste, who announced the cancellation of the motorcade of provincial buses in the Southern Tagalog Arterial Road (Star) tollway, from Batangas City to Calamba, said “we will resume (the protest) later this week.”

The bus operators were the same group that staged a motorcade on Thursday from Magallanes in Makati City to Calamba, via the South Luzon Expressway.

In Baguio, members of the local chapter of Piston visited seven jeepney terminals to air their grievances.

The group later held a three-minute noise barrage at the intersection of Session Road and Magsaysay Avenue using gongs, bottles, sticks and whistles. They asked drivers of passing vehicles to blow their horns as a gesture of support for their call.

In Isabela, a 10-vehicle convoy led by members of Piston and militant groups went around Santiago City asking for the people’s support in stopping oil price increases.

The caravan also went around Cauayan City and the towns of Ilagan and Roxas.

Drivers in the cities of San Jose and Cabanatuan said they needed to earn so they did not join the strike.

In Bacolod province, about 75 members of the United Negros Drivers and Operators Center and Bayan-Negros gathered at the public plaza to call for an end to the imposition of value-added tax on oil products, the “overpricing” by big oil firms and the oil deregulation law.

In Iloilo City, some 100 protesters joined a rally in the afternoon at Plazoletagay, the city’s main intersection.

The protesters ended their rally with a noise barrage which was joined by jeepney drivers who sounded their horns.

In Aklan province, Bayan, Piston and other militant groups also held a rally at around 10 a.m. at the West Aklan Terminal in the capital town of Kalibo.

The LTFRB reported that most areas in the country were unaffected by the transport strike.

Regions 10 and 11 were the worst-hit areas by the strike, the LTFRB said. About 40 percent of jeepneys in Region 10 and 80 percent in Region 11 refused to ply their routes, according to LTFRB Board Member Manuel Iway.

Transportation Secretary  Roxas visited protesters near his home in Cubao, Quezon City, one of the major centers for Piston’s rallies.

He assured groups that steps were being taken to mitigate the effects of rising fuel prices on consumers and public transport operators alike.

“We heard the public and transport groups’ sentiments on the continuous oil price hike, thus the government has quickly taken concrete action to check if there is any collusion among oil firms to control oil prices in the market,” Roxas said in a statement.

Roxas noted the “questionable collaboration” among oil firms that may result in illegal price setting—at the expense of commuters.

He said President Aquino had formed an interagency task force to investigate the existence of any such arrangement.