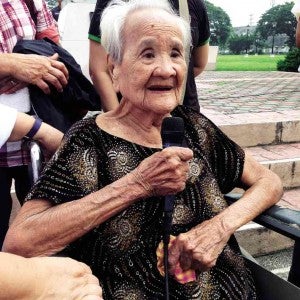 ON THE DAY the Pampanga provincial government honors her for her contribution to attaining social justice, Simeona Punsalan-Tapang, alias “Commander Guerrero” in the anti-Japanese army Hukbalahap, asks Gov. Lilia Pineda to look for Huk veterans and care for them in their old age.
TONETTE T. OREJAS/INQUIRER Central Luzon

“Let’s give them attention,” Simeona Punsalan-Tapang, also known as “Commander Guerrero,” told Pampanga Gov. Lilia Pineda, provincial board members and employees who gathered in a tribute to her at the provincial capitol here on Monday.

“Please help them. That’s my wish,” she said.

The testimonial was given a day before her 92nd birthday. Fetched by an ambulance from her house in San Simon town, she joined the event in a worn-out wheelchair.

She recited a poem hailing freedom fighters from the ranks of farmers, workers and intellectuals. “Democracy was won with heavy sacrifices and lives,” she said.

The most that she said about herself in the struggle to liberate the Philippines from Japan and the United States was, “Even for a moment I did not complain.”

On Tapang’s request, Pineda asked the provincial board to pass an ordinance giving monthly aid to Hukbalahap veterans recognized by the Philippine Veterans Affairs Office (PVAO).

Last week, the PVAO resumed Tapang’s old age pension of P6,700 monthly, which stopped coming in March. She was able to withdraw her money after PVAO Administrator Ernesto Carolina, at the intervention of the Center for Kapampangan Studies, approved the revalidation of her status after confirming that she is alive.

It was not immediately known how many Hukbalahap veterans are in the PVAO’s current lists.

Tapang said the pension of Hukbalahap veterans was provided by the late strongman Ferdinand Marcos through Presidential Decree No. 1207.

During Monday’s rites, Pineda presented to Tapang a certificate of recognition, a bouquet of red roses and financial assistance.

Pineda also said they would give Tapang a new wheelchair.

“We salute you for your sacrifices and courage. The Huks played a big part in making the Philippines a free nation. You proved that Kapampangan women and men are freedom-loving,” Pineda said.

She said Tapang was the first female commander she met in person.

Tapang told reporters that her surviving comrades must have been afraid to come out because they went through a difficult time.

“They must be sad and sick. They need help,” she said.

Asked about her war exploits, she related the retreat of Apalit Squadron 104, to which she belonged, to Pulung Gubat in Guiguinto town, Bulacan province.

V-formation but my second in command refused to follow my order. I pulled out my 37-cal. gun and pointed it to him. I said, ‘Now you will have to follow my command.’ He did,” she said.

Tapang remembered the retreat that she, Felipa Culala, a Huk founder who went by the alias “Commander Dayang-Dayang,” and the rest of the First Squadron made to Zambales province on orders of Commander Banal (Bernardo Poblete of Minalin town in Pampanga).

“There was a Chinese squadron whose members always came to our rescue. I would meet some of them even after [World War II],” she said.

An organizer of Katipunang Pambansa ng mga Magsasaka sa Pilipinas before the war, Tapang said she joined the communist-led Hukbong Mapagpalaya ng Bayan  after the war.

“I did not stop helping farmers,” she said.

She never remarried and chose to raise her only child, Ligaya, now 66, alone.

Read Next
NEWSBRIEFS
EDITORS' PICK
Get exciting deals and discounts when you download the new McDonald’s App
SM continues to send relief assistance to remote towns in Batangas
Palace: US Senate move also made Duterte junk VFA
Year of metal Rat: ‘Rooster’ Duterte warned of scandals
China expands lockdown against virus, fast-tracks hospital
‘A greener, cleaner tomorrow’: A how-to guide for Filipinos who want to help with today’s energy crisis
MOST READ
No time for revelry; Tagaytay instead plans for alert level 5
Palace: US Senate move also made Duterte junk VFA
Virus scare: 600 Chinese from Wuhan must leave PH by Jan. 27
Philippines orders 12 helicopters from Russia—Duterte
Don't miss out on the latest news and information.