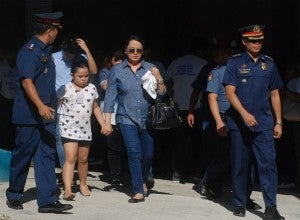 MANILA, Philippines—For allowing the relatives of Senators Ramon “Bong” Revilla and Jose “Jinggoy” Estrada to overstay beyond the jail’s visiting hours, the head of the Philippine National Police (PNP) Custodial Center found himself in hot water.

Custodial Center head Superintendent Mario Malana has been asked to explain the alleged violation of the visitation policies.

On Sunday, the Philippine Daily Inquirer earlier reported that some visitors of Revilla and Estrada were still in the detention facility until around 2 a.m.

This despite the policy that visitors of PNP detainees are only allowed on Thursdays and Sundays, from 9 a.m. to 3 p.m.

This was confirmed by Chief Superintendent Reuben Theodore Sindac, PNP Public Information Office (PIO) chief, in a press briefing a day after the violation allegedly happened.

“I have received message from Estipona that he has already ordered Malana to explain within 48 hours why no administrative sanctions should be given against him,” Sindac said.

Sindac clarified that Estrada sought permission from them to celebrate his 25th wedding anniversary with wife Precy and some relatives and close friends on Saturday.

“But to extend until Sunday, there was no clearance for that,” he said.

Asked how many visitors of the Estrada and Revilla came last weekend, Sindac said he has already requested for the guest list.

‎For high-profile detainees, only 30 visitors could be allowed to enter the PNP Custodial Center at once.