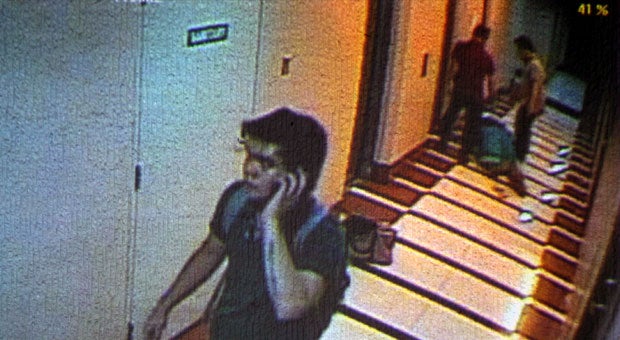 The CCTV footage at the 29th floor of the One Archer’s Place shows this man talking to the phone while two others are dragging Guillo Cesar Servando along the hallway next to the elevator. The man, according to the Manila Police District, is one of the 2-3 persons being investigated after they were seen on the CCTV footage escorting the four victims to the condominium after the alleged hazing rites on Saturday evening.  SCREENGRAB from the CCTV footage

MANILA, Philippines–Malacañang on Monday condemned the killing of a De La Salle-College of St. Benilde student allegedly at the hands of fraternity members in Manila last weekend.

“Unacceptable” was how presidential spokesman Edwin Lacierda described the death of 18-year-old Guillo Cesar Servando, a student of Hotel, Restaurant and Institution Management.

The Manila police said Monday that the rites were done by the Tau Gamma Phi St. Benilde chapter and not by the Alpha Kappa Rho fraternity University of Santo Tomas chapter.

“We’ll use the full force of the law to go after the hazing conspirators,” Lacierda told reporters as the father of Servando appealed for justice for his son, a second-year student.

“We are going to pursue all those people who are instrumental in the heinous murder of this particular individual. This should not continue,” said Lacierda, who was visibly upset over the incident.

The presidential spokesman reminded fraternities about the law against hazing.

“We certainly would [like to remind] fraternities that there is an Anti-Hazing Act, and that if any death occurs, you will be held liable,” he said.

“Think about your future. You are at the cusp of your maturity or adulthood. And if you do that, you are just wasting away your productive years in prison. So let this be a warning to you—all those fraternities and their leaders,” Lacierda added.

In Bacolod City, where Sevando’s family hails, Aurelio Cesar “Taboy” Jalbuena Servando told a local daily that they would like to see justice served.

Aurelio said they were waiting to hear what his son’s companions had to say.

The companions, identified by police as John Paul Raval and Lorenze Agustin, both 18; and a 17-year-old boy, were reportedly taken to the Philippine General Hospital for treatment.

The father said word that his son had joined a fraternity came as a surprise to him and left him many questions.

“Why did he need to join a frat?” Aurelio said.

His son’s remains were at La Salle Green Hills in Mandaluyong City on Monday and will be cremated on Wednesday.

The family might bring his son’s cremated remains back to Bacolod for burial at a later date, Aurelio said.–With Maricar B. Brizuela

Father of Benilde student killed in hazing cries out for justice