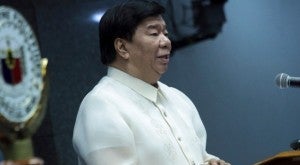 MANILA, Philippines — Senate President Franklin Drilon is urging the Department of Budget and Management (DBM) to fast-track a pay review for all government employees, including policemen and soldiers, so they can enjoy the new wages starting next year.

Drilon said the study on how the government can improve the salary rate being implemented with all government employees, including those serving in the military and the police must be fast-tracked “in order to uplift the standard of living of our public employees.”

“I have requested the DBM to expedite its analysis, so that if possible, we can already put into effect the new version of the Salary Standardization Law and we can include the required budget in the 2015 national expenditures program, which we will approve at the end of this year. That way, all public employees can already enjoy their new wages starting next year,” he said in a statement on Monday.

“By raising the salary scheme in government, we will provide the biggest morale boost for state workers and give them continued inspiration to excel in their works.”

“But more importantly, we can attract more competent and dedicated professionals, especially the youth, to work in government and help craft policies and programs that will benefit our people,” he said.

He believes that improved government collection in the past years could provide the state ample funds to capacitate a new Salary Standardization Law.

“With the kind of fiscal discipline being observed by the administration for the past years, I believe we have a great chance of raising government wages without negatively affecting our budget deficit. It is highly important that we help government workers as prices for everyday essentials such as rice or vegetables go up,” he said.

“Our policy makers must ceaselessly look at parts of the National Budget which could permit and put into action sustainable salary augmentation, in a manner that would help our workers, yet would not result in budgetary deficit or decreases in other important sectors such as social and health services,” said the Senate leader.

Drilon said improvements in the compensation of policemen and other law enforcers would help drive up recruitment, enabling the state to field more police officers who would protect the public.

“One good effect of increasing the salary of our government workers is that it can help us fill in the numbers as far as more policemen or soldiers are concerned,” he said.
ADVERTISEMENT

“By making these professions more financially rewarding, we help convince more people to enlist in our security services, and that means more people in the fight against crime and disorder in our streets,” Drilon added.