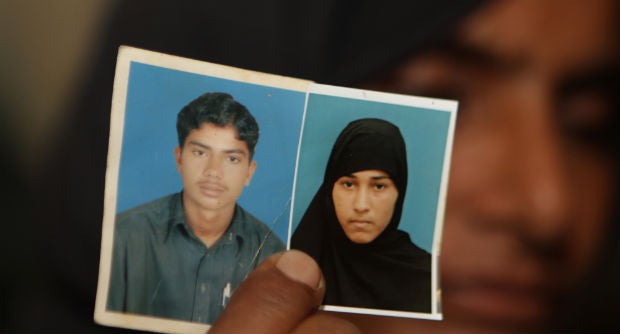 A Pakistani woman Nargas Bibi shows family pictures of her son Sajjad Ahmed and his wife Muafia Bibi, who were killed by Bibi’s parents, at her house in Hussain Abad village near Sialkot, Pakistan, Sunday, June 29, 2014. A 17-year-old girl and her husband were killed by her family for marrying without their consent, and another young woman was burned alive by a man for refusing his proposal in Pakistan’s eastern Punjab province, police said Sunday. AP

LAHORE – A teenage girl died in Pakistan after being doused in petrol and set alight by a man who wanted to marry her but whose proposal had been rejected, police said Sunday.

It was the second brutal killing in Pakistan’s Punjab province within days, after a 17-year-old girl and her husband were murdered by a group of relatives for marrying against their wishes.

The latest incident took place Saturday in a village which is part of Toba Tek Singh town.

Sidra Shaukat, 18, was at home without her parents when 22-year-old Fayyaz Aslam entered her house, doused her with petrol and set her alight, Mohammad Akram, a police official told AFP.

“She was taken to a local hospital which referred her to the main hospital but she died before reaching there,” Akram said.

Aslam has been arrested and a case registered against him.

“The boy loved her and had also sent a proposal to marry her, but that was rejected by her family,” Akram said.

“He used to harass my daughter – yesterday he came in the afternoon and threatened dire consequences after we asked him to avoid coming again,” Ali told AFP.

Another teenager, Maafia Bibi, 17, and her 31-year-old husband Muhammad Sajjad were murdered by Bibi’s father, her two uncles, grandfather and mother on Thursday night for marrying against their wishes in Daska town.