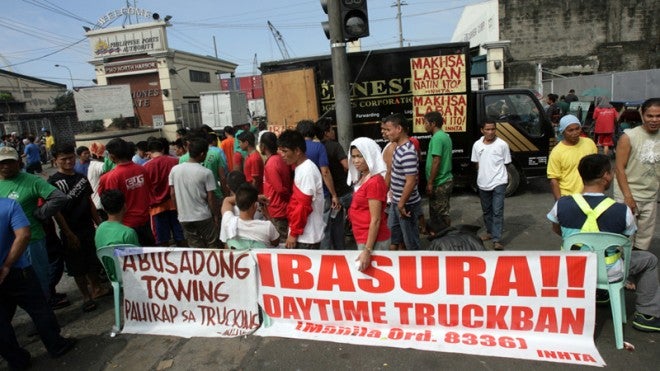 Protesting truckers and porters stage a picket rally in front of Moriones gate at the Port Area in Manila on Feb. 25, 2014, during the implementation of an expanded truck ban in the city. A massive supply chain gridlock, initially caused by Manila’s truck ban and exacerbated by well-meaning but ill-timed tightening of customs and transport regulations in recent months, has been blamed for a price spike in agricultural products that businessmen and regulators fear could spread to consumer goods and export input. INQUIRER PHOTO/NIÑO JESUS ORBETA

MANILA, Philippines–A massive supply chain gridlock, initially caused by Manila’s truck ban and exacerbated by well-meaning but ill-timed tightening of customs and transport regulations in recent months, has been blamed for a price spike in agricultural products that businessmen and regulators fear could spread to consumer goods and export input.

“We have never seen anything like this before. The domino effect is reverberating throughout the economy, and if not reversed will strangle economic growth, which may go to zero. All aspects of the consumer, manufacturing and industrial economy will be starved of supplies,” said ports tycoon Enrique K. Razon Jr.

Agaton Teodoro O. Uvero, customs deputy commissioner for assessment and operations, reported that imports dropped by 7 percent in May as a result of the poor flow of raw materials and finished goods in the country’s biggest ports.

“The impact is across the board, not only in farm products. We have been getting complaints from local businessmen and the Peza (Philippine Economic Zone Authority) and an import slowdown is imminent unless we resolve this soon,” Uvero said.

In a phone interview, Razon said the rising number of trucks on the road should be seen not as a mere inconvenience but “a product of economic growth.”

“The Philippine economy has been growing at a compounded rate of over 7 percent, which translates to many more trucks for the delivery of goods and more cars because more consumers can afford them. This is a good thing. The problem is there are no additional roads and infrastructure to absorb the increase,” he said.

With trucks allowed to go through the major Manila ports in the evening (except for a five-hour window from 10 a.m. to 3 p.m. during the day), ICTSI said, the traffic fell by 20 percent as the penalty of a P5,000 fine and impoundment for violators forced strict compliance among haulers.

ICTSI said an average of six vessels in both the MICT and South Harbor terminals were waiting at any given time due to the port bottleneck, while shipping lines were imposing prohibitive surcharges of over $450 per container on importers.

“This additional cost, plus the added cost of trucking (P20,000 to P30,000 per truck) will ultimately be swallowed by the consumers, especially at the critical C and D markets,” Razon said.

While deliveries improved slightly following the adoption of 24-hour express lanes in the city early this month, the Land Transportation and Franchising Regulatory Board’s (LTFRB) “yellow sticker” campaign has further dragged the decline in MICT traffic to 30 percent. The drive meant fewer delivery trucks on the road, especially those owned by major global and local transport firms whose clients include multinational export companies operating in economic zones.

If this situation would persist through the rest of the year, Razon said,  the country was at risk of failing to meet its growth target of at least 6.5 percent this year.

“The economic consequences are grave and this can now be seen in most key retail establishments around the metro,” he said.

“What has essentially happened is that port capacity has been dramatically reduced, thus reducing the ability of our supply chain infrastructure to support growth rates required to hit the economic targets,” he added.

While import costs have gone up due to higher customs valuation as part of our antismuggling efforts (for example, garlic is now properly assessed at 40-percent duty or double the previous rate), the price increases of these products have been exacerbated by the doubling in cost in transport and handling charges due to the port congestion resulting from the truck ban.

“Instead of delivering twice in one day, trucks have been reduced to delivering once in three days. Supply has been affected as ships have refused to dock in Manila as its ports are at full berth. Importers refuse to bring in more supply because they would be charged more keeping their goods in the ships and warehouses,” Uvero said.

With supply tightening and likely to get worse rather than better, he said, traders had resorted to jacking up prices to reflect the current market supply and demand conditions as a result of the port congestion.

He said the Bureau of Internal Revenue’s move to weed out illegal customs brokers also had an adverse effect on supply especially since the new accreditation rules required them to comply within a short deadline (which was moved from June 30 to July 31) and a centralized processing center in Manila.

“I believe it will take at least two months for import supply to normalize as traders adjust to all these changes but only if we make the right measures to coordinate our out-of-rhythm reforms soon,” said Uvero, a lawyer who specializes in logistics management.

Economist Benjamin Diokno, Estrada’s former budget secretary, rejected claims that the truck ban was to blame for the rise in agriculture products.

“The major reason is the DA’s (Department of Agriculture) failure to see the looming imbalance between supply and demand for major food items, and its failure to act promptly. Maybe administration officials got enamored by their promise of self-sufficiency,” Diokno said in a text message. “To say that inflation especially for agriculture products is caused by the truck ban is ridiculous.”

He pointed out that the truck ban had resulted in less smuggling “so you wonder why they are not favoring the ban.”

Diokno also said the import slowdown was due to slower imports of capital goods and machinery parts and not food products.

Rosendo So, chair of Sinag, an alliance of local farm producers, said the live weight and farm gate prices of livestock and farm commodities, respectively, had not increased despite the surge in the price of agriculture products in recent weeks.

So said market prices reflected the shortage in these commodities arising from the added costs of higher transport, storage and licensing expenses and the clogged shipping and road lanes.