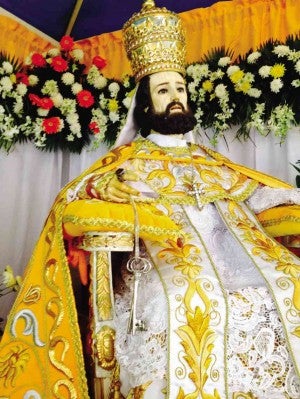 THIS IMAGE of St. Peter the Apostle, “Apung Iru” to folks, is well revered in Apalit town, Pampanga province, with devotees accompanying him by foot or in boats on the mighty Pampanga River every last Saturday of June. TONETTE T. OREJAS / INQUIRER Central Luzon

APALIT, Pampanga—More than 1,000 swimmers on Saturday gathered at  Pampanga River, the main flood drainer of the Central Luzon region, to accompany and secure the image of St. Peter the Apostle on its 170th fluvial procession since 1844.

The 1,300 swimmers, who wore yellow shirts and shorts, are members of  Knights of St. Peter and devotees of St. Peter, who is known in this riverside town as “Apung Iru.”

“Aside from being skilled swimmers, we also underwent rescue training,” said Noli Tienzo, president of  Knights of  St. Peter here.

The devotees on Saturday began the traditional “kuldas,” the practice of moving the saint’s image from the chapel of the Espiritu compound in Barangay (village) Capalangan to Barangay Gatbuca, where a single-tier pagoda decorated with flowers was waiting.

Manalang said he began his “panata” (vow) in 1952. He said the vow rewarded him with good health.

“Apung Iru calls me when I am away. One time in Zamboanga, I felt that his beard was touching my head. So I returned to Apalit to help him in the ‘libad’ (fluvial procession). When I was in my 30s, the pagoda was made of bamboo,” Manalang said.

In the last 10 years or so, a bigger two-tier pagoda, about 6 meters high and sitting on a barge, has been used in the fluvial procession to ensure the safety of the image and the devotees.

From Gatbuca, a banca carrying the smaller pagoda and the image headed slowly to Pampanga River. The banca   sidled up  next to the barge, enabling the knights to transfer the image to the larger pagoda.

The knights, mostly men, took their places around the barge and on the small and big pagodas, to protect the image.

Fifty or so knights rode the barge during the procession. The rest were dispersed in smaller boats to help the devotees, who waited by the riverbanks, waving leaves or wading in the water to show their respect to Apung Iru.

The big pagoda headed to the towns of Candaba, San Luis, San Simon and back to Apalit where the image was taken to St. Peter Church fronting the river.

The image, he said, was never church property because his ancestors, Calixto Espiritu and his son Pedro Armayan Espiritu, bought the image, made of ivory, from a relative, Maxima Santos, in exchange for a piece of land in Apalit.

The image, dressed in papal garments and holding two silver keys and a scepter, was saved by residents from a fire in the Espiritus’ ancestral home on July 22, 2002.

Unlike in other places, the feast of St. Peter in Apalit lasts for three days (June 28-30) to give devotees more time for veneration. Tonette Orejas, Inquirer Central Luzon