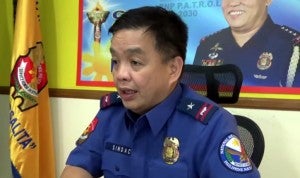 MANILA, Philippines–The Philippine National Police (PNP) is bracing for a “possible terrorist threat” in Davao City, alerting all its police forces in Mindanao on Sunday morning.

“We  could not, however, divulge any further details of said reports received so as not to compromise ongoing security operations by both the PNP and the Armed Forces of the Philippines (AFP) in these areas,” Chief Superintendent Reuben Theodore Sindac, PNP Public Information Office chief, said in a statement.

But Sindac stressed that the police were told to “minimize any inconvenience to the public,” saying the threat should not cause alarm for civilians in Mindanao, particularly in Davao region.

“Measures being undertaken by our security forces in the area were simply to be more proactive and preemptive to these reports,” he said.

He also urged the public to give PNP any information that “would be of help to the police and to (their) ongoing security operations.”

The government security forces beefed up their foot and mobile patrols, intensified checkpoints and gun operations in land, sea, and airport terminals, commercial center, places of convergence and vital installations.

“(These) measures are designed to harden possible soft targets of opportunity,” he added.

The PNP also assured its “continued vigilance against the reported threats.”

“Let us not allow this to affect our lives or decide our fate,” Sindac said.

The threat alert came as minority Muslims in the mostly Catholic nation began celebrating the holy fasting month of Ramadan.

It also came just over two weeks after police captured Khair Mundos, one of the country’s most wanted Islamic militants from the Abu Sayyaf group who was also on the US government’s terror watch list.

Mundos is a key leader and fund raiser for the Abu Sayyaf, which is blamed for the country’s worst terrorist attacks, including a 2004 bombing of a ferry in Manila Bay that left more than 100 dead.

The Philippine military said it was also hunting Abdel Basit Usman, who is also on the US government’s terror list.

Usman had earlier been reported killed in a 2010 US drone strike in Pakistan, but new evidence had emerged that he was alive and hiding among the militant community in Mindanao.

The Philippines and the United States have linked Usman to the Abu Sayyaf and Jemaah Islamiyah, acknowledged by the international intelligence community as the Southeast Asian arm of Al-Qaeda.