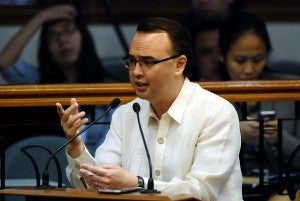 CLARK FREEPORT, Philippines—Senate Majority Leader Alan Peter Cayetano said he expected three of his colleagues to remain locked in jail for plunder and graft cases until the last day of their terms of office.

Senators Ramon “Bong” Revilla Jr. and Jose “Jinggoy” Estrada, who are detained at the Philippine National Police headquarters in Camp Crame, and Sen. Juan Ponce Enrile, who is anticipating arrest, are expected to be absent in the Senate’s next sessions not only because  plunder is a nonbailable offense but because pieces of evidence against the three are strong.

“I saw the evidence and these are damning. I haven’t heard any defense from them except: ‘Pulitika lang ’yan at kami lang ang pinag-iinitan (Politics is behind the plunder and graft charges, and we are being singled out),’” Cayetano said.

He spoke about countryside development at the 44th general membership meeting of the Pampanga Chamber of Commerce and Industry on Thursday.

He said the absence of the three senators would not disrupt the work of the Senate. “We still have more than a majority. We can pass treatises needing two-thirds of votes,” he said.

He said the senators had not discussed how to handle work in committees that Revilla, Estrada and Enrile chair in their absence. “They have vice chairs in the committees. If their absence is permanent on the basis of a ruling of the court, that’s the signal to redistribute the committees,” he said.

He said he was against the idea of allowing the three senators to hold committee hearings in jail.

“I cannot predict what the Sandiganbayan will do but as a lawyer, the evidence is strong. My concern is that if it takes five to 10 years [to prosecute the accused] and if the next president is sympathetic to the three, it will be easy to get them off,” said Cayetano, who had announced his interest in running for either vice president or president in 2016.

The next president, he said, could exert influence on the judiciary because the appointment of 10 or 11 new associate justices in the Supreme Court would rest on him or her.

Cayetano said he had been resisting the temptation to visit Revilla and Estrada.

“There are victims [who were denied government projects because of corruption. Visiting my colleagues would be a disservice to the justice system. That will send a different message,” he said.

Cayetano said Enrile should be under hospital detention rather than house arrest. Hospital detention, he said, would ensure that the medical needs of Enrile, 90, are taken care of.

Cayetano said the Supreme Court should allow live coverage of the trials of the accused in the plunder case for transparency. Tonette Orejas, Inquirer Central Luzon