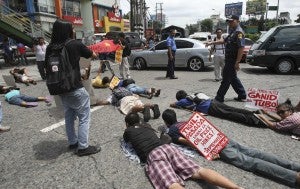 PROTEST PLANKING. A police officer tries to dissuade protesters from carrying on their "planking" by lying prone on the pavement, blocking briefly the traffic at a busy roundabout in Manila, Philippines, Monday, Sept. 19, 2011 to support calls for a nationwide "transport holiday" following unabated oil price increases in the past weeks. The sign at left reads: Transport Strike Against Oil Price Hikes! AP Photo/Bullit Marquez

Police on Monday morning dealt with a “new form” of protest mounted by members of the militant League of Filipino Students (LFS) on España Boulevard in Sampaloc, Manila, in support of the nationwide transport strike against rising fuel prices.

Some 20 LFS members lay face down on the pavement in 10- to 15-minute intervals at the corner of España and M. Dela Fuente Street. They dispersed peacefully after two hours when authorities stepped in to unclog traffic in the area.

The activists performed a youth fad known as planking: the body lying as flat, straight and rigid as a wooden plank.

Craze from Down Under

The “game” is in finding the oddest or coolest places to be photographed while planking, such as the gap between park benches or in front of famous landmarks.

The craze is said to have started in Australia and has reached the local youth scene.

Activists of an earlier time, however, may see planking as just a renaming of the so-called die-ins, wherein protesters also hit the ground, pretending to be corpses.

The LFS plankers occupied two lanes of the boulevard, timing their first move with the traffic light turning red at around 8 a.m.

They repeated this each time the stop sign went on, while other LFS members and allies from another youth group, Anakbayan, distributed leaflets to passing motorists.

But later, Modequillo said, “we had to discourage them because they were causing heavy traffic already. Even if they were lying on the pavement while the traffic light was red, they were still obstructing traffic. They occupied almost half of España.” 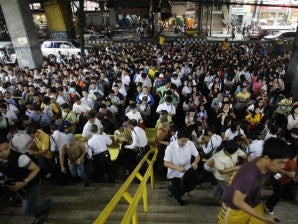 TRAINS GET SWAMPED. Filipino commuters crowd the Light Rail Transit station during the morning rush hour in suburban Caloocan City, Philippines, Monday, Sept. 19, 2011, as many found alternate means of public transport when a leftwing group declared a "transport holiday" to protest against the continued oil price hikes in the past weeks. Protest leaders said Sunday that they want the government to scrap an oil deregulation law and a consumption tax that have helped oil prices soar to record highs. AP Photo/Aaron Favila

“When the police arrived, they ran away. So that was just for photo-op,” Edwin Lacierda, presidential spokesperson, told reporters in a briefing.

In a statement, LFS national president Terry Ridon attributed the traffic congestion in Manila not to his group’s protest action but to the suspension of the vehicle number-coding scheme by the Metropolitan Manila Development Authority (MMDA).

“The drivers had stationary protest areas and no lanes were blocked to ensure the free flow of traffic. Nothing else can thus be blamed other than the suspension of the MMDA of the number coding scheme,” Ridon said.