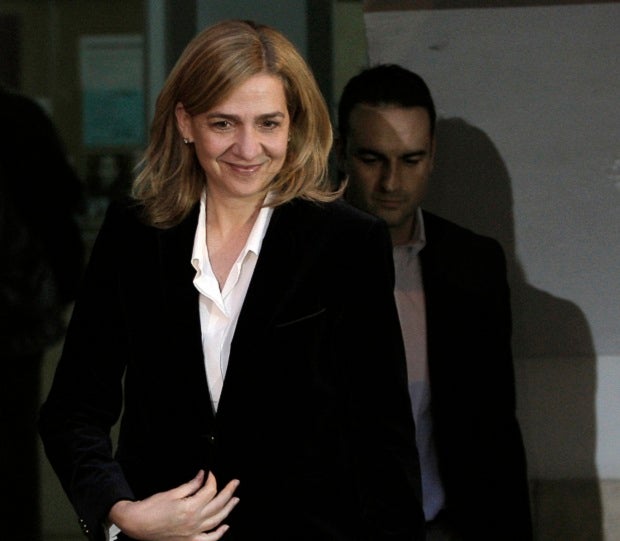 In this Feb. 8, 2014 file photo, Spain’s Princess Cristina leaves the courthouse of Palma de Mallorca in Palma Mallorca, Spain after being named as a fraud and money laundering suspect. A Spanish judge on Wednesday June 25, 2014, has moved closer to indicting Princess Cristina, sister of newly proclaimed King Felipe, in a tax fraud and money laundering investigation centering on her husband. Wrapping up a four-year pre-trial investigation, Palma de Mallorca investigative magistrate Jose Castro kept Cristina on the list of suspects he thinks should stand trial, in her case for money laundering and tax fraud cooperation.  AP

MADRID — A Spanish judge moved closer Wednesday to indicting Princess Cristina, the sister of newly proclaimed King Felipe VI, in a corruption and embezzlement investigation centering on her husband.

Wrapping up a four-year pre-trial investigation, Palma de Mallorca investigative magistrate Jose Castro kept her on a list of suspects he thinks should stand trial.

He said Cristina is suspected of two counts of cooperation in tax fraud and one of money-laundering. The judge said her husband, Inaki Urdangarin, is accused of embezzlement and fraud. Neither has been formally charged.

Prosecutors and defendants will study the ruling and present their accusations or arguments. The judge will then decide what indictments to issue, a step not likely to occur before September.

The state prosecutor has long opposed having Cristina as a suspect and has said he will appeal Castro’s ruling.

The case centers on allegations that Urdangarin used his Duke of Palma title to embezzle some 6 million euros ($8 million dollars) in public contracts through the Noos Institute, a nonprofit foundation he and a business partner set up that channeled money to other businesses, including Aizoon, a company he owned with Cristina.

The decision in the case comes less than a week after Cristina’s elder brother, Felipe, was proclaimed king following the abdication of his father Juan Carlos.

The 76-year-old Juan Carlos said he was stepping aside after a four-decade reign so younger royal blood could energize the country.

But the fraud case involving his daughter and other scandals had seriously tarnished the royal family’s image.

Cristina, 49, became the first Spanish royal to be questioned in court since the monarchy was restored in 1975 when she testified in the case in February.

Commenting on the judge’s decision, the Royal Palace would only say it had “full respect for the independence of the judiciary.”