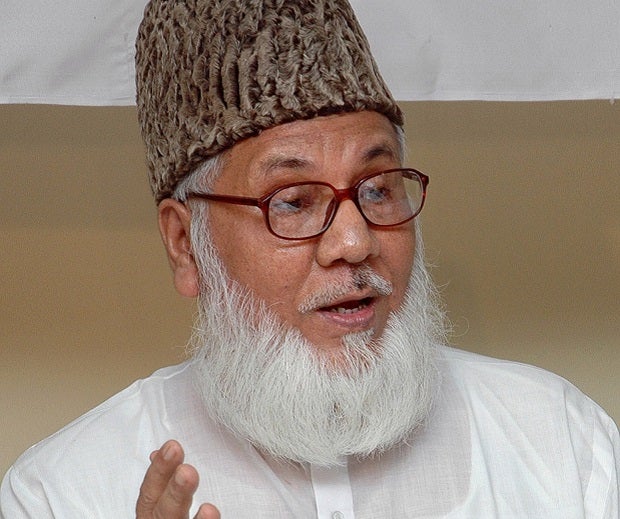 In this Aug. 20, 2005 file photo, Bangladesh’s Jamaat-e-Islami President and Industries Minister Motiur Rahman Nizami addresses the media in Dhaka, Bangladesh. A Bangladesh court Tuesday, June 24, 2014, delayed a verdict against the top leader of the Islamist party charged with war crimes after the defendant in the politically charged trial become ill. A special tribunal was set to deliver the verdict for Nizami, who faces 16 charges, including genocide, murder, torture, rape and destruction of property during the nation’s independence war against Pakistan in 1971.  AP

DHAKA, Bangladesh (AP) — A Bangladesh court Tuesday delayed a verdict against the top leader of an Islamist party charged with war crimes after the defendant became ill.

A special tribunal was set to deliver the verdict for Jamaat-e-Islami chief Motiur Rahman Nizami, who faces 16 charges, including genocide, murder, torture, rape and destruction of property during the nation’s independence war against Pakistan in 1971.

The head of a three-judge panel, M. Enayetur Rahim, said a  new  date for the verdict will not be set until the judges see a detailed medical report on Nizami.

Rahim delayed the verdict after jail authorities told the tribunal that Nizami could not be in the court for the verdict because of his illness.

“We don’t think it will be logical to announce the verdict under current circumstances,” Rahim told a packed courtroom.

The war is still an emotionally charged issue, with Bangladesh saying Pakistani soldiers, aided by local collaborators, killed 3 million people, raped 200,000 women and forced about 10 million people to take shelter in refugee camps across the border in neighboring India during the nine-month war.

That led some, who were demanding the death penalty for Nizami, to say the postponement was “a conspiracy.”

“We will continue to campaign for justice,” said Imran H. Sarkar, who is campaigning for a death sentence. “We will not accept any compromise with the people who killed our people in 1971.”

Thousands of extra security officials had been deployed across Bangladesh ahead of a verdict because of worries it could spark violence as similar court cases have in the past.

There was no immediate comment from the government on the delay.

Two special tribunals set up by Prime Minister Sheikh Hasina to try people for war crimes have delivered nine verdicts in which 10 people have been convicted. One senior leader of Jamaat-e-Islami party has already been hanged for his role in killing people in 1971.

The prosecution says Nizami acted as the supreme commander of a militia group, Al-Badr, which carried out a systematic plan to torture and execute pro-liberation supporters during the war.

He faces charges of personally carrying out or ordering the deaths of nearly 600 Bangladeshis.

The prosecution has asked for a death sentence for Nizami, while the defense argued the charges were politically motivated.

Nizami was a Cabinet minister during former Prime Minister Khaleda Zia’s last term in 2001-2006, and he was sentenced to death in January in a huge arms cache case.

Jamaat-e-Islami party openly campaigned against independence, but the party has denied committing atrocities.