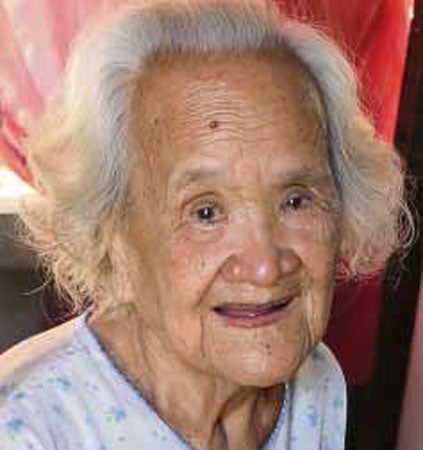 HAPPY VET At 91, Simeona Punsalan-Tapang is now getting a monthly pension again from the government. In her younger days, she was known as “Commander Guerrero” who fought for social justice with the Hukbalahap guerrilla army. CONTRIBUTED PHOTO

The “deceased” status of Simeona Punsalan-Tapang, known as “Commander Guerrero,” has been corrected after a revalidation, said PVAO media officer April Joyce Hermosa.

Tapang’s only child, Ligaya, 66, said that upon the advice of PVAO Administrator Ernesto Carolina, she submitted additional documents as proof her mother was alive.

“There has been difficulty finding her account in the system because her full name was not originally given,” Hermosa said in an e-mail.

She said Tapang’s old-age pension, which stopped in March this year, was resumed in May.

Tapang has been receiving a pension since the 1990s, a fruit of the Hukbalahap Veterans’ (HukVets) campaign.

Ligaya said her mother’s old-age pension of P6,700 monthly and the additional P5,000 she got as the survivor of her husband Pablo, a Huk who was killed in 1949, were not enough for medicines.

But luck shimmered on the trail leading to the PVAO’s rediscovery of Tapang. It came from the unseen hand of the late Remedios Gomez-Paraiso, Tapang’s friend.

Paraiso, who went by the alias “Commander Liwayway,” commanded Squadron 3-V and was chief of the military provision division of Hukbalahap in Central Luzon.

When Paraiso died at age 95 in May, Robert Tantingco, executive director of the Center for Kapampangan Studies, posted the news on the social networking site Facebook.

“After I posted on Facebook the news on the death of Commander Liwayway, (Tapang’s) relatives came forward to tell me she (Tapang) is still alive. We wasted no time, having learned our lesson with Commander Liwayway, who died before we could see her,” Tantingco said.

Tantingco and Tapang met on June 17 in her house in Barangay (village) San Miguel in San Simon town, Pampanga province.

A photograph that Tantingco took of Tapang became part of the proof of life that he asked the Inquirer to relay to Carolina.

A usual proof of life is a photograph of a veteran reading a newspaper of current date.

“I found her bedridden and in pain,” Tantingco told Carolina.

The PVAO administrator, in turn, ordered a resumption of the revalidation process for the war heroine.

It turned out that they had campaigned for benefits for their comrades who had put their lives on the line repulsing Japanese soldiers and rescuing American troops. Taruc died in 2005.

Strength of a man

Tapang was an organizer for Katipunang Pambansa ng mga Magsasaka sa Pilipinas before World War II. After being imprisoned by the Japanese, she joined Apalit Squadron 104, one of the group’s strongest squadrons.

Tapang was “a big-bodied woman with a man’s strength, fond of wearing a man’s clothes. She became adept at handling an automatic rifle and would command on the firing line,” Taruc had said.

Tapang has outlived Felipa Culala (“Commander Dayang-Dayang” of Candaba town), a Huk founder who was executed for alleged excesses, and Elena Poblete (“Commander Mameng” of Minalin town), who was killed in battle.

Tapang shared stories of Huk encounters and social justice campaigns she had supported after the war.

“The revolution did not begin and end with World War II,” Tapang said.

An ‘amazona’ in Manila