Jinggoy Estrada back in PNP jail

MANILA, Philippines–Following in the footsteps of his father, ousted President Joseph Estrada, Sen. Jinggoy Estrada went to jail Monday on charges of plunder, although not for amassing ill-gotten wealth in “jueteng” collections but for embezzling tens of millions of pesos in government funds.

It was April 25, 2001, all over again, except that the father was not accused this time, but was only accompanying his son to the Philippine National Police Custodial Center in Camp Crame, Quezon City, where the senator would be held while being tried on charges of plundering the Priority Development Assistance Fund (PDAF) in connivance with businesswoman Janet Lim-Napoles, the alleged brains behind the P10-billion pork barrel scam.

On the coaster ride from the Estrada home on Polk Street, San Juan City, to Camp Crame with the ex-President, who is now mayor of Manila, was the senator’s mother, former Sen. Luisa Ejercito, his wife, Precy, their children and other relatives.

The senator and his wife, who renewed their wedding vows on Sunday night ahead of their silver anniversary on June 28, and their children stopped at Polk, in Greenhills, from their home in Corinthian Hills in Quezon City to pick up the elders.

Estrada surrendered to the police after the Sandiganbayan issued a warrant for his arrest. He is accused of pocketing P183 million from the PDAF and of 11 counts of graft. He is facing life in prison if convicted.

As he had promised, Estrada did not stage a show for his surrender, unlike Sen. Bong Revilla who traveled in a 10-vehicle convoy carrying family members, political supporters, fans and a camera crew to surrender to the Sandiganbayan last Friday.

But about 80 of Estrada’s supporters gathered in front of the PNP headquarters to give him moral support. Some wore T-shirts marked “Keep the faith and hold on” and “It might be stormy now, but the sun will shine again.”

Estrada’s group arrived at 3 p.m. After blowing a kiss to journalists who had been waiting for him, Estrada boarded a police vehicle, which took him to the PNP multipurpose building where he was booked.

Then he was taken to the PNP Custodial Center, where he joined Revilla, who is accused of embezzling P242 million from the PDAF, and where they expected Sen. Juan Ponce Enrile, accused of pocketing P172 million of his pork barrel funds, to join them soon.

Fight to the last breath

“I’ll fight this case to my last breath,” said Estrada, a former movie actor. His lawyer, Alexis Abastillas-Suarez, said she would ask the Sandiganbayan to grant the senator bail, which is not allowed in cases involving plunder. 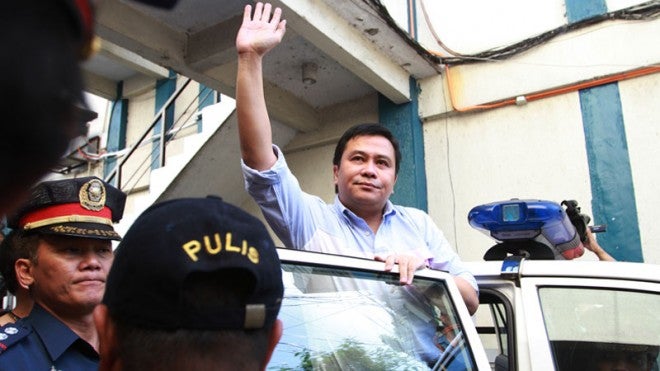 FAREWELL Sen. Jinggoy Estrada bids farewell to his supporters after his booking procedure and medical examination. He was later detained at Camp Crame in Quezon City. EDWIN BACASMAS

Estrada turned himself in to Director Benjamin Magalong, chief of the Criminal Investigation and Detection Group, who waited for him at the police headquarters.

Suarez said Estrada and his family thanked the police for treating him well.

“His condition is OK. The police respected his integrity as a person,” Suarez said.

She said Estrada would occupy the second of the four rooms in the detention bungalow at the Custodial Center, next to the room where Revilla is being held.

Both detention rooms measure 32 square meters. Like the two other rooms, both have ceiling fans, small kitchens, toilets and beds.

“His cell is just beside Senator Revilla’s. They’ve already seen each other,” Suarez said.

“It was normal and sober. It was very quiet inside. He was not smiling during the booking process,” PNP spokesman Chief Supt. Reuben Theodore Sindac told reporters.

“[Estrada] looked fine. The family members were just there observing the whole procedure,” he added.

He said Estrada’s blood pressure was 110 over 70 when police doctors conducted a checkup.

“There is no sign of external injuries or recent application of trauma,” he said.

Estrada was the second senator to be arrested in the pork barrel scam. The first was Revilla, who was taken in last Friday after days of campaigning for sympathy from his supporters in the slums of Cavite province and Metro Manila.

Both Estrada and Revilla blame their predicament on politics, accusing the administration of President Aquino of singling out opposition lawmakers in the prosecution of the people responsible for the pork barrel scam.

Commenting on Estrada’s arrest, Justice Secretary Leila de Lima said Monday that she had always expected the Sandiganbayan to sustain the Ombudsman’s finding against the senator in the pork barrel scam investigation.

“As I’ve been always saying, we would have not referred the case (against Estrada) to the Ombudsman if we were not convinced that we had a strong case and that it was also the position of the Ombudsman. It would not have filed the case in the Sandiganbayan if it was not convinced at the very least of the existence of probable cause,” De Lima said.

The third senator accused, Enrile, is questioning the evidence against him submitted to the court, which has said it will review the nearly 10,000 documents before deciding whether to order his arrest.

“All of us are sad about what’s happening. What happened 13 years ago is happening again,” she told reporters at Polk Street in an interview aired over radio. “I was 11 at the time. But I feel stronger now.”

Otherwise, Ejercito said her father and the rest of the family were confident he would be acquitted, as he was in 2007, although his father was convicted and sentenced to life imprisonment but pardoned by then President Gloria Macapagal-Arroyo shortly after his conviction.

Estrada fought back his tears as he tried to stay calm following news of the issuance of a warrant for his arrest.

“This is very painful for me. But this is an order from the court, and I have to face it,” Estrada, clad in light-blue polo, told reporters.

His lawyers were to file a petition for bail on Monday, and the senator expressed confidence this would be granted by the antigraft court. He said the case against him was weak.

“I see no case against me,” he said. If given a fair trial, he would win acquittal, he said.

When they arrived at Polk Street from Corinthian Hills, the senator embraced his parents. Amid the crush of TV cameramen and reporters, the elder Estrada asked for privacy with his son.

The senator’s sister Jackie Lopez and brother Jude were also around. 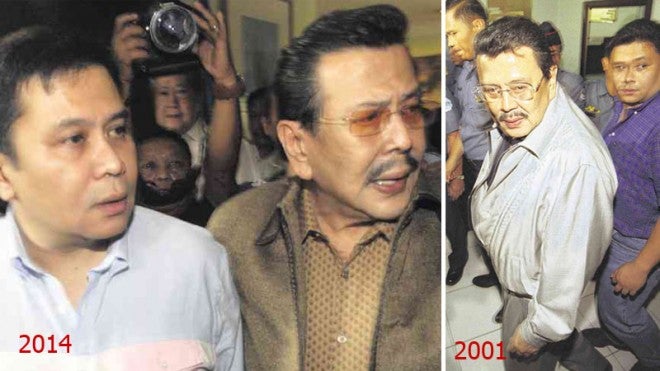 TAKE TWO Sen. Jinggoy Estrada visits his father, former President and now Manila Mayor Joseph Estrada, at the family’s home in Greenhills, San Juan City, before going to Camp Crame in Quezon City to be detained. The senator is facing one count of plunder and 11 counts of graft for allegedly misusing the Priority Development Assistance Fund. In 2001, father and son (inset) were detained at Camp Crame on charges of plunder in relation to criminal acts like receiving payoffs from “jueteng” operators and pocketing funds from tobacco excise taxes of Ilocos Sur province. NIÑO JESUS ORBETA AND ERNIE U. SARMIENTO

The emotional mother ranted against the government for singling out her son, who she said did not pocket any kickbacks from the scam but merely endorsed his pork barrel to foundations.

She wondered why government agencies discovered that more than 80 of the recipients were dummies only now.

“They merely endorsed the NGOs. No money passed through their hands. If at all, it’s the DBM (Department of Budget and Management) and the implementing agencies that disposed of the money. They knew whether the NGOs were fake or not,” she said.

“If they wanted to implicate me, they should have implicated me, not my son. Go ahead, file the charges,” added the former senator, whose name was also mentioned during the Senate inquiry into the pork barrel scam.–With reports from Christine O. Avendaño and Kristine Felisse Mangunay

Jinggoy Estrada vows to fight for acquittal, vindication ‘to my last breath’