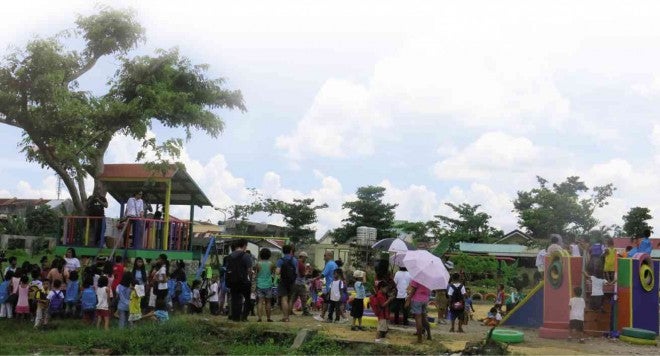 A TREE HOUSE is the centerpiece of the new playground, built to symbolize hope for the children who lost their homes.

Beneath a blue sky on a sunny day, child victims of Supertyphoon “Yolanda” went as high as they could on the swing and slid down slides in their new playground.

They ran around, eager to try everything, broad smiles on their faces.

As they enjoyed the playground’s every feature, they seemed to have completely forgotten the horror brought by the surging waters and lashing winds of the strongest tropical cyclone to hit Tacloban City.

Painted red, green, blue, yellow and orange, the first post-Yolanda playground was a welcome addition to Sagkahan Elementary School (SES), a public school where some classes were still being held in tents and several rooms remained roofless.

The main attraction for the kids was a tree house, built to symbolize hope for the  children who lost their homes when Yolanda ravaged the city in November, said Kris Llanes, Johnson’s Baby senior brand manager.

Sigrid Perez, playground designer, said the facility was built based on “what the children want, what they need and what they dream to see in a playground.”

One interesting feature was the water play equipment. Children could fetch water using colorful cups or watch those cups float.

“We discovered that many of the children were very afraid of water because of the storm surge, so we built the … equipment to reintroduce them to the fun of playing with water,” Perez said.

“Nangurog ako (I was trembling),” the first grader repeatedly said in a voice barely above a whisper.

Mily Recio’s granddaughters had to be carried to the second floor of their neighbor’s house after their bungalow in Barangay Picas, Sagkahan, was submerged in water.

The 63-year-old Recio said she would calm the children by reminding them that God loved them and  would not let another Yolanda devastate the city.

It was to “help in the healing process” of children like Tuozo and Recio’s grandchildren that Johnson & Johnson (J&J) Philippines’ “Di Lang Laro ang Laro (Play is Not Just Play)” constructed the playground with the Department of Education  and Play Pilipinas.

They interviewed the SES principal, teachers and pupils and the children’s parents to ensure that the design suited the community.

Children were also asked to illustrate what to them was “the perfect playground.”

Llanes said she was surprised to see drawings of a house, the Virgin Mary, Jesus Christ and superheroes.

She said they asked a child psychologist what it meant and were told that “when kids are traumatized, they look for someone in control.”

The Recio siblings turned to faith while other children imagined that superheroes would save them from monstrous winds and waves.

One of the kids drew a man with a sword battling the rain, Llanes recalled.

Through J&J’s “Let’s Bring PLAY Back to Tacloban” project, employees donated toys related to the themes of the kids’ drawings, like superhero action figures.

“Play is the natural means of expression for children and [it] allows them to channel whatever pent-up feelings or emotions they may have, especially if they find it difficult to verbalize or talk about them,” she said. 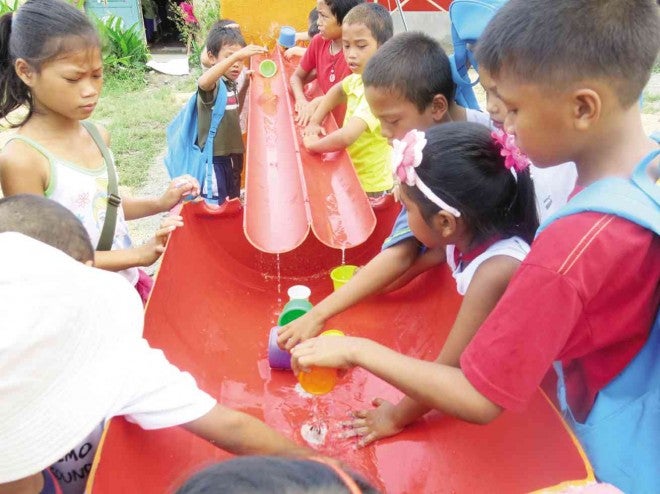 WATER play is encouraged to help kids overcome the trauma caused by floods and water surge.

SES principal Niceta Lirios-Galura said having a playground was important not only for children to overcome trauma but also for them to learn values.

“Play is one avenue for learning,” Galura said.

Kids learned the virtue of patience, for instance, as they waited for their turn to use the slide, she said.

June 2, the first day of school, SES had almost 100 percent attendance, compared to less than 80 percent in previous years.

“Children are excited to come to school because of the playground,” she said.

But the principal said pupils would be allowed on the playground only after classes or during the 60-minute playtime provided for in the curriculum.

Galura thanked private and nongovernment organizations for helping rebuild their school and putting smiles back on the children’s faces.

Through the playground, Llanes said “we wish to enable the students and the community around them to have a sense of regaining control over their lives.”

For Recio, watching her granddaughters run around the playground with their friends assured her they were all right.

“You know kids, they forget all their troubles when they play,” she said.