When weddings are a community affair | Inquirer News

When weddings are a community affair 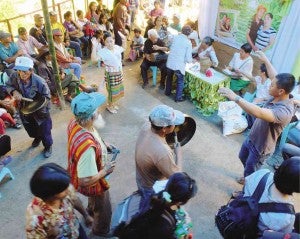 When the fairy-bluebird, locally known as “adog,” appears in the woods and in the fields, this indicates the beginning of the first of two marriage seasons in Sagada town in Mountain  Province.

Other birds mate or migrate during specific times of the year,  but the adog does so in May, and the Sagada elders say this is an auspicious time to hold the indigenous marriage rite called “babayas.”

The ceremony begins with a “dawak” in which a man and a woman declare their intentions in front of the community through the elders who will administer the ritual.

But while the couple may decide to get married under traditional rites, the actual situation is that they might already be husband and wife under the Christian setting.

The babayas thus complies with the couple’s traditional beliefs where the decision to finally perform the rite is driven by their desire to anoint their union in the manner of their ancestors. To do so, however, takes an amount of time for preparation and expense.

There is no urgency on the part of the couple to perform the babayas. The elders would say that the option is left with the couple, “until you can afford to do so.”

Today, with civil and Christian unions having the force of law, a couple would usually have the option to include the preparation for the babayas in their plans.

But to those who adhere to the practices of the indigenous cultural community, the rituals must be followed as they are prescribed and transferred in oral traditions.

As a result, there are no shortcuts into the process, and the required implements for rituals, such as the number of sacrificial animals, are nonnegotiable.

The couple who sought the babayas on May 24 were Pecdasen and Kinagan of the Cacay and Oyagat families. In the ritual, the role of the parents was also underlined because the couple would seal their union from the two families. As such, the parents are called “menpebbey” to mean that from their houses, their son and daughter have asked to get married.

Having been informed of their intentions, the marriage becomes a community affair. The people’s involvement in the setting up of the makeshift shade (“damara”) in the parents’ yard, where all the activities would take place, is in itself a declaration that the rite of marriage is already taking place.

A significant preparatory activity is the butchering of a carabao the day before the wedding. In the course of sacrificing the animal, the elder leading the prayers offers tobacco and rice on the spot where the animal died.

The elder then extols the spirit of the carabao and asks that it spares from hardship or sickness those who would partake of its meat.

The meat from the carabao, however, is not a part of the celebratory meals. Instead, it is apportioned as a form of acknowledgment to community members who helped in the wedding preparations or to those who gave contributions to the couple in cash or in kind.

During the day of the wedding, “daw-es” and “senga” are performed for the spirits, with the elders interceding for the couple’s prosperity and well-being.

The daw-es is a ritual for cleansing and healing. The senga is a ritual “that takes care of all contingencies,” according to Albert Bacdayan, a Cornell University anthropologist and Sagada resident.

This part of the ritual requires the obligatory sacrifice of three pigs and two chickens. The “gido,” or the act of waking the spirits, requires the symbolic “feeding” of the spirits first before the community can take part in meals.

But perhaps more significantly, the occasion of the marriage of Pecdasen and Kinagan was also a sort of coming of age of the groom’s patriarch, Deligen.

During the senga, Deligen uttered prayers for the spirits to guard and protect the couple. He did this not so much for his role as a father but because he is now considered pan elder of the community (“ama”).

As a father who married off a child in the traditional way, Deligen now has the right to wear the ceremonial feathered headdress (“bayoyok”) during important rituals and to post the pair of horns of the sacrificial carabao in front of his house as a sign that he has a child who is married.

Another chicken is sacrificed to announce the use of gongs (“tadek ti gangsa”) for the festivities. The celebration proceeds as the couple receive their “supon”—contributions to start off their marriage. The elders perform the “liwliwa” (chants or songs), which are stories of entertainment, and offer advice for the couple.

The senga concludes the following day with a “duwaya” or the public accounting of contributions for the couple. Cash contributions are wrapped in a blanket called “aban,” which the elders swing around as they remind the couple not to spend the money in gambling or in some other vices. The blanket is then wrapped around the bride, who is asked to take good care of the money.

The last couple to wed this season, Pecdasen and Kinagan, along with their parents, would have to follow ritual prohibitions (against leaving the house, for instance), as the next couple prepares to get married in December, the next babayas season.