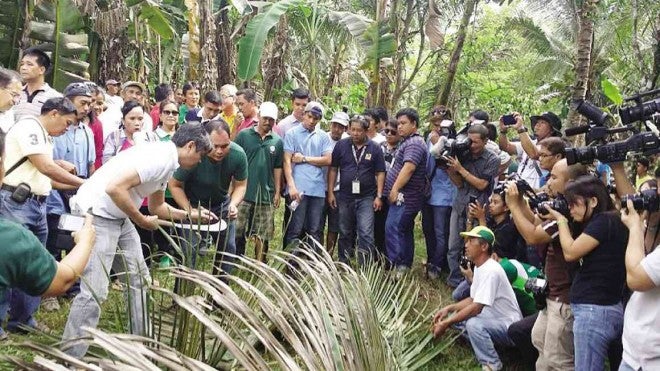 It was a demonstration of how to fight the coconut scale insect (CSI).

The launching of the government’s anti-CSI measures in a coconut farm in Barangay (village) Potol in Tayabas City on Friday was led by Secretary Francis Pangilinan, presidential assistant for food security and agricultural modernization.

Pangilinan and Gov. David Suarez, assisted by officials of the Philippine Coconut Authority, led the demonstration of how to combat the infestation of CSI that has affected over 1.7 million trees in the country, said Janet Geneblazo-Buelo, head of the Quezon public information office.

The demonstration will be replicated in other coconut-producing provinces across the country.

Early this month, the national government unveiled a six-month emergency measure to address the coconut insect infestation and allotted P750 million to contain the spread of pests in other coconut areas in the country.

Quoting Pangilinan, Buelo said Quezon  was selected as the launching site because the province was the first to launch counteraction against CSI infestation despite being the last province in the region to be invaded by the pest.

“We have to act quickly because there is so much at stake. The livelihood of most Quezonians depends on the coconut industry,” Suarez said on the phone. Quezon is one of the biggest coconut-producing provinces in the country.

Buelo noted that Quezon was the first to declare a state of calamity in October last year in its effort to effectively combat the pest when it was just beginning to appear in some parts of the province.

Suarez had also ordered the provincial agriculturist office to immediately form the Scale Insect Provincial Action Group  that initiated massive information and education campaign to create awareness among the farmers across the province.

It also provided affected farmers with assorted vegetable seeds or alternative sources of income to tide them over.

The provincial government also established a “biological control rearing station” in nearby Pagbilao town, the first in the Calabarzon region.

As of June 10, a total of 435,710 coconut trees in different parts of the province were infected with “cocolisap,” Roberto Gajo, Quezon chief agriculturist, said.