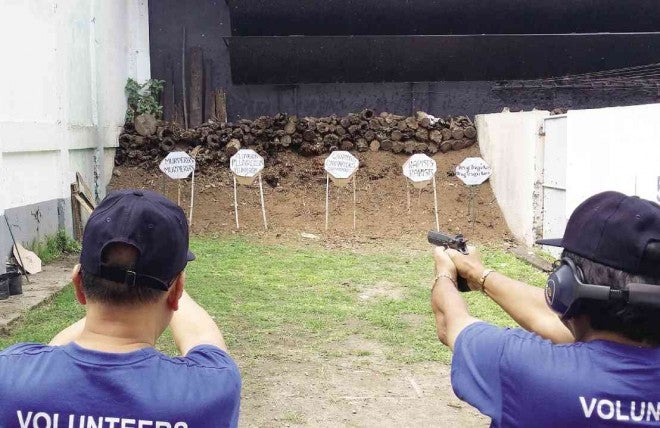 HARD TARGETS Gun enthusiasts from the VACC initially planned to use photos of known criminals as targets at Saturday’s shootfest. JULIE AURELIO

Members of an anticrime watchdog group who have been campaigning for the restoration of the death penalty—and even the firing squad—for heinous crimes made their trigger-fingers do the talking on Saturday.

About 100 gun enthusiasts from the Volunteers Against Crime and Corruption (VACC) honed their skills in a shooting competition with a twist: Their targets have the words “plunderers,” “murderers,” “rapists,” “carnappers” and “drug traffickers” written on them.

ONE of the favorite targets up close

The VACC initially planned to mount “pictures of criminals” to serve as the shooters’ targets, “but we were warned against it by the range officials since it may be (considered) in bad taste,” said VACC founding chair Dante Jimenez.

The shootfest was held at the firing range of Camp Crame, the headquarters of the Philippine National Police (PNP), a day after the camp in Quezon City took hold of a VIP detainee, Sen. Ramon “Bong” Revilla Jr., one of the three senators charged with plunder in connection with the pork barrel scam. Senators Juan Ponce Enrile and Jose “Jinggoy” Estrada are also facing arrest, their detention quarters ready also at Crame.

“These people are the culprits who victimize us, the victims. It’s about time we protect ourselves against them,” Jimenez said, referring to the shooting targets.

Formed in the 1990s, the VACC is composed mostly of family members of victims of high-profile crimes, many of which remain unsolved.

“With heinous crimes on the rise, we must emphasize that we must now protect ourselves and our families. We should also be responsible gun owners,” Jimenez added. “We want people not to forget that these criminals are just around the corner, waiting to strike, and that they should be prevented from doing harm.”

According to Jimenez, about 25 percent of their 10,000 members nationwide are gun owners or shooting enthusiasts. “Some own guns for self-defense, some to pursue a hobby. They practice (marksmanship) on their own, independently,” he said.

The shootfest has been an annual VACC activity for the last 16 years, but Saturday’s event was the first to be held at Crame.