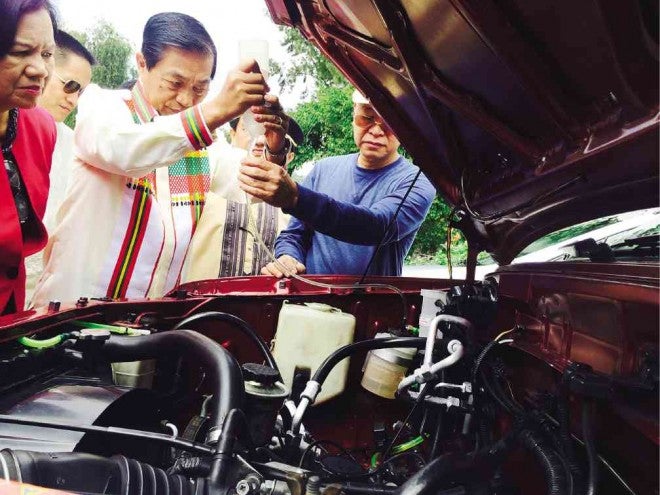 IRKED that Baguio was “mistagged” as the most polluted in the country in May, Mayor Mauricio Domogan allowed a Baguio-based inventor and businessman to test a “water reactor” on one of the city government’s vehicles. VINCENT CABREZA/INQUIRER NORTHERN LUZON

BAGUIO CITY—Angry that the summer capital’s air quality had been mislabeled as the poorest among cities in the country, officials of Baguio City are gambling on untested technology that supposedly breaks down water into fuel.

On Monday, Mayor Mauricio Domogan, the city council and the police watched businessman Mario de Quinqua operate a government vehicle which he configured to run using 70 percent gasoline, and 30 percent water that is broken down into combustible hydrogen and oxygen gas by a device that he invented.

The system helps a vehicle burn all of its fuel, so it does not expel carbon monoxide, “which would improve the city’s air quality,” De Quinqua told the officials.

“De Quinqua” is a pseudonym which the inventor, a garments manufacturer, uses to protect himself from “big economic interests.”

He asked the Inquirer to conceal his real surname.

A month since reports named Baguio as the most polluted city, citing the World Health Organization’s 2014 Global Air Quality Report, Domogan said the undeserved tag continues to haunt the city.

He said reporters had assumed that a high level of air pollution detected on lower Session Road represented air quality in the entire city.

Bonifacio Magtibay, WHO country director in the Philippines, had disowned TV, radio and newspaper reports in a May 13 letter, saying they did not conclude that Baguio was the most polluted city in the Philippines.

Domogan said he wants to accelerate programs that would clean Baguio air and its reputation.

Addressing Senior Supt. Rolando Miranda, Baguio police director, Domogan said he wants to test the technology on a police vehicle to make it the first water-hybrid police car in the country.

De Quinqua said he donated his technology to the city government and has piloted his “water reactor” using a vehicle of the city general services office and driven by its chief, Romeo Concio.

De Quinqua had promised to design and manufacture another device for the Baguio police.

If it is successful, Concio said the city government may outfit the fleet of Baguio vehicles with the device that would cost about P30,000 each.

But De Quinqua provided little details about his work, except to stress that he has been working on this invention since the 1960s.

“I did consider developing an electronic car, but I figured it would only make the public reliant on companies that produce electricity. I wanted to give the public more freedom,” he said.

“For communities near water, all drivers need to do is fetch water from a creek or collected water from the rain and their cars will run efficiently and environmentally friendly. How can they tax rain?” he said.

A group promoting sustainable transport, however, is arranging for a test drive in Baguio of an electronic jeepney, as another way of reducing air pollution.