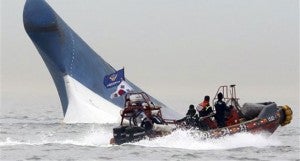 In this April 16, 2014 file photo, South Korean coast guard officers try to rescue passengers from the Sewol ferry as it sinks in the water off the southern coast near Jindo, south of Seoul, South Korea. AP

SEOUL – The principal of the South Korean high school that lost more than 240 students in the Sewol ferry disaster has been suspended, the local education office said Friday.

Choo Kyo-Young “was removed from his post in connection with the ferry disaster,” a senior official told AFP.

He declined to elaborate on the precise reasons behind the disciplinary action, which involves a three-month suspension after which the individual is either reinstated or reassigned.

Dawon High School in Ansan city, south of Seoul, has become a poignant symbol of the human tragedy that unfolded when the 6,825-tonne Sewol ferry capsized and sank off South Korea’s southern coast on April 16.

Of the 476 people on board the vessel, 325 were Dawon students on a school trip to the southern resort island of Sewol.

More than 240 were killed, along with 10 teachers.

The school’s vice-principal, who was rescued from the ferry, committed suicide three days later, hanging himself from a tree near the gymnasium where relatives of the victims had camped out during the rescue operation.

“Surviving alone is too painful… I take full responsibility. I pushed ahead with the school trip,” he wrote in a suicide note.

Some parents had initially criticised the school for going ahead with the trip given the poor weather conditions when the ferry set off from the western port of Incheon.

But conditions were fine when the vessel actually capsized and initial investigations suggest structural problems with the ferry and lax safety precautions were responsible for the disaster.

ADVERTISEMENT
Read Next
US changes screening of migrant kid sponsors
EDITORS' PICK
10 Filipinos positive for COVID-19 in UK, 7 in Ireland — envoy
Nograles: Cabinet members to donate 75% of monthly salary to aid COVID-19 fight
Quick chat with Nicole Andersson: ‘You really don’t need much to be happy’
IATF to LGUs: Issue ordinances vs attacks on frontliners, COVID-19 patients
Diokno to Duterte: OK to make fun of buck tooth, but focus on people’s needs first
Robredo spox thanks Duterte for defending VP’s efforts vs COVID-19
MOST READ
Coronavirus hotbed Rizal to shut borders on April 6
Gov’t mulling quarantine period extension of 15-20 more days
ADB warns PH against prolonged lockdown
Sotto on Isko Moreno’s call: We do our job without the media following our every move
Don't miss out on the latest news and information.