In Zambales town, China intrusion into PH seas is most felt 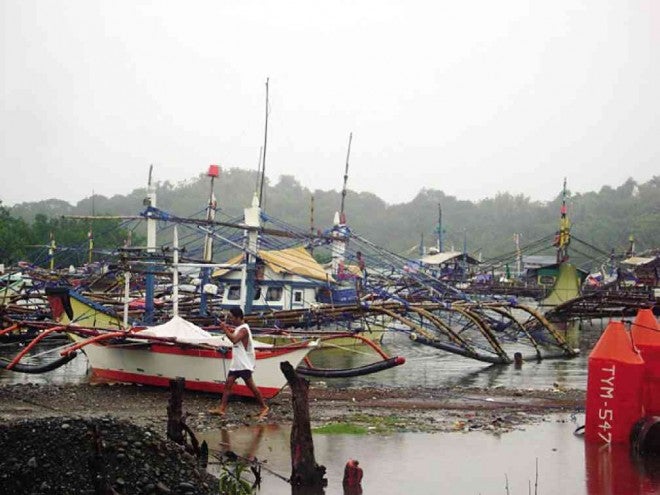 FISHING boats await their day at sea in Masinloc, Zambales, a town where Chinese intrusion into Philippine territory is most felt. ALLAN MACATUNO/INQUIRER CENTRAL LUZON

MASINLOC, Zambales—Fisherman Tingloy Ruiz, 50, showed up early at the covered court of Sitio Balogo in Barangay (village) Inhobol here on Sunday and quietly watched personnel of the Philippine Coast Guard Auxiliary unload their bags at a corner.

Some Navy and military officers in uniform were already in the area, ready for a balikatan (shoulder to shoulder) exercise, only this time it was not a war game.

Instead, Ruiz underwent first aid training to help fishermen like him save lives if they get into trouble at sea. He and his village mates were also taught how mangroves could be an alternative source of income.

The fishermen’s wives were offered haircutting lessons to keep them busy and earning while their husbands fish.

Different groups have volunteered to spend a day with the villagers in a coastal community here to help arm them with knowledge to protect themselves and their livelihood from Chinese Coast Guard personnel in the disputed Panatag Shoal, or what locals call Bajo de Masinloc.

The provincial government initiated the training program to provide security to fishermen who have been suffering from dwindling fish catch when the Chinese occupied the area and kept Filipino fishermen away.

In January, a group of fishermen was driven away by Chinese Coast Guard vessels using water cannons.

Capt. Alberto Carlos, assistant chief of naval staff for logistics of the Philippine Navy, said although local fishermen take the Chinese harassment in stride, they are being encouraged to record and report Chinese attacks.

“We’re here to help our fishermen assert their rights to fish in the disputed shoal,” Carlos told the Inquirer.

“We’re not asking our fishermen to be confrontational. Rather, we would like to help them show, in a diplomatic manner, that they have all the right to go to Panatag Shoal,” he said.

He, however, asked fishermen to be cautious amid the territorial dispute between the Philippines and China.

Carlos said the Armed Forces of the Philippines is ready to provide security to the fishermen at sea.

The Philippine Navy and Coast Guard, he said, are setting up a hotline where fishermen could report Chinese harassment.

The Navy, with the help of the Bureau of Fisheries and Aquatic Resources, donated at least 500 mangrove seedlings to give residents of Inhobol a source of livelihood.

Carlos said villagers, especially fishermen, could turn to mangrove propagation as an alternative source of income.

The villagers, he said, would be paid to plant and propagate mangroves.

Commander Norman Biola, chief of staff of the Naval Forces Reserve-Northern Luzon, said this kind of bayanihan would assure villagers that they are not being neglected.

Addressing residents, Biola said: “I hope our presence here could give you some relief. Don’t be afraid.”

He said fishermen would be organized so they can assert their rights over the disputed shoal.

“With the help of other concerned agencies, we’re establishing a municipal fishing area where fishermen with smaller boats can stay,” he said.

He, however, encouraged fishermen with larger vessels to stay within the country’s territorial waters, such as Panatag Shoal, to assert their rights to fish in the area “since it is owned by the Philippines.”

Lt. Col. Monib Mamao, head of the Army’s 24th Infantry Battalion, said his battalion is ready to provide security to the villagers.

Mamao sent a team of soldiers here to provide free haircut to children and other villagers.

Read Next
June 2014 Architect Licensure Examination
EDITORS' PICK
What’s at stake for every fighter at ONE: NextGen
NCR’s COVID-9 alert level may be downgraded from 3 to 2 soon — DOH
FDA reviewing COVID-19 vaccines’ EUA for booster shots
Legarda emphasizes role of ICC/IPs in nation building this IP month
Climate Change Commission and Nestlé PH to discover sustainability-focused solutions
Biden vows to stand with Asia on freedom, hits at China on Taiwan
MOST READ
Drivers now required to take driver’s education upon license renewal – LTO
Marcos Jr’s ‘special diploma’ from Oxford: You can have it, too
Gordon to Duterte: You? Teaching me courtesy?
PDP-Laban Cusi wing Senate bets willing to give way to Duterte
Don't miss out on the latest news and information.