MANILA, Philippines—Members of a police task force, formed to investigate the killing of journalist Nilo Baculo Sr., were themselves respondents in criminal and civil suits filed by the crusading journalist in the past two decades, Baculo’s lawyer and family said on Thursday.

Baculo’s family warned that some members of the task force might not want to solve the June 9 murder because of their involvement in graft cases filed against them by Baculo.

Harry Roque Jr., counsel for the Baculo family warned that inaction in catching the perpetrators in the killing could be a ground for a law suit against President Benigno Aquino III.

In a press conference Thursday at the University of the Philippines College of Law in Diliman, the victim’s daughter Nilda Baculo told reporters that her family has not heard anything from the police investigators tasked to solve her father’s murder. 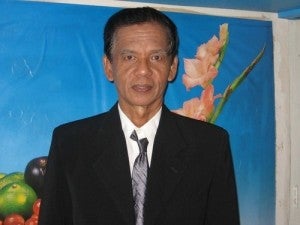 She said, “Hindi talaga nila gusto tulungan si Papa kasi kaaway nila si Papa. Wala silang ginagawang aksyon (They really do not want to help Papa because they are his enemies. They are doing nothing).”

Asked why the family perceived the policemen as Baculo’s foes, Nilda said, “Because he filed cases against most of them (Oriental Mindoro police). From the chief down to an SPO3-ranked policeman.”

Nilda pointed out that since the 1990s, her father has filed more than 20 criminal and civil cases against Oriental Mindoro officials, including police officers, and private individuals as a “concerned citizen.” Most of the cases involved graft and corruption.

“All he wanted was to see Oriental Mindoro peaceful. He did not care if he was killed for it because he wanted the irregularities addressed and for the people he sued to be proven culpable,” she said.

Nilda added that proof of the task force’s anemic response to the killing was their failure to gather all the evidence in the murder and to secure the lone witness, who was with her father when he was gunned down by men on motorcycles near his home in Barangay Lalud in Calapan City.

She said that the witness sustained minor wounds from the attack and was immediately discharged from the hospital and claimed none of the policemen were able to secure him.

Nilda explained that her father merely accompanied the witness to the Calapan City court to assist him in subscribing a complaint-affidavit pertaining to a drug offender.

Baculo’s daughter added that whenever she or another sibling would follow up the case with the task force, formed by the Oriental Mindoro police a day after the killing, they simply gave the assurance that they were still working on it but did not provide updates.

Roque lamented that the only action that the government has so far taken to solve the killing was to create a task force, “a very typical response of the Philippine government.”

He cited a report by Philip Alston, former UN special rapporteur on Extrajudicial, Summary or Arbitrary Executions, which said that “the treaty obligation of the state in protecting the rights of the victims goes beyond creating task forces. They must actually provide the victims an adequate domestic remedy which means it must be efficient and that the domestic remedy will cause the prosecution and punishment of the perpetrators of these killings.”

The lawyer added, “Again we reiterate the Alston view that it is the lack of political will that is responsible for the killings from happening.”

He reminded the government to help the families of the victims in  Baculo an adequate domestic remedy and compensation, under the European Union-Philippine Justice Support Programme, otherwise he can sue the President using the 2009 international humanitarian law.

The law, he said, not only provided that the sitting President could be held responsible for the failure of the state to investigate, prosecute, and punish perpetrators of killings but he can no longer invoke sovereign immunity from suit.

“So we are giving this administration due notice. We will use legal remedies including instituting criminal proceedings against the President unless we see an effort, an honest effort to investigate and prosecute the perpetrators of this killing,” Roque said.

According to the National Union of Journalists of the Philippines, Baculo is the 33rd media worker to be slain during President Aquino’s term.

Baculo hosted a blocktime program “Isumbong mo Kay Ka Nilo,” where he sniped at government irregularities and gave way to citizen complaints, and published at least three provincial papers in his 25 years working in the media.