Transport groups up in arms vs LTO, ltfrb, dotc order 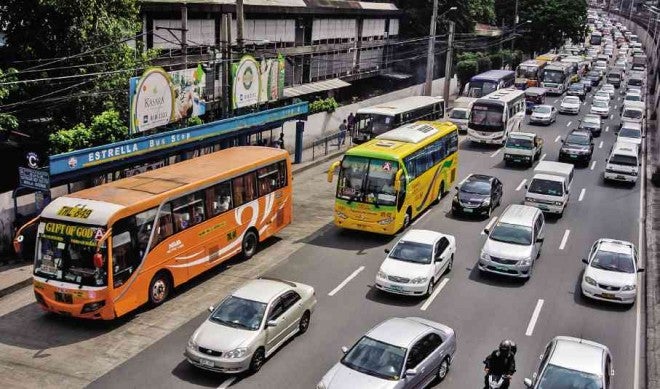 STARTING Thursday, operators of public utility vehicles without a transport franchise face stiffer fines and penalties in a move aimed at doing away with ‘colorum’ vehicles. LEO M. SABANGAN II

An alliance of transport groups is pushing through with a protest caravan today to call for a halt in the implementation of a controversial joint administrative order imposing higher fines on out-of-line and “colorum” or unlicensed public utility vehicles (PUVs).

This was despite an announcement from Land Transportation Franchising and Regulatory Board (LTFRB) Chair Winston Ginez on Tuesday that the agency would suspend for 120 days the implementation of higher fines and penalties for out-of-line PUVs under Joint Administrative Order (JAO) 2014-01 issued by the Land Transportation Office (LTO), LTFRB and approved by the Department of Transportation and Communications (DOTC).

The JAO also imposes corresponding fines and penalties for other PUV-related violations such as refusal to convey passengers to their destinations; overcharging; employing reckless, insolent, discourteous or arrogant drivers; using PUVs with defective parts; trip-cutting and using tampered taxi meters, among others.

George San Mateo, national chair of the Pinagkaisang Samahan ng mga Tsuper at Opereytor Nationwide (Piston), said in a media forum on Wednesday that around 2,000 to 3,000 people—or 1,000 vehicles, mostly jeepneys and UV Express vans—were expected to participate in the transport caravan. He clarified that the activity was not a transport strike.

According to him, the protesters would assemble at Quezon Memorial Circle in Quezon City at 7 a.m. and head for the LTFRB and LTO offices on nearby East Avenue where they would hold a program. The group would then proceed to the DOTC building in Mandaluyong City for another rally until 3 p.m.

Piston is a convenor of the No to JAO 2014-01 Alliance whose members include the Alliance of Concerned Transport Operators, Federation of Jeepney Operators and Drivers Association of the Philippines, Pasang Masda, Stop and Go Coalition and Metrobus group.

An umbrella organization of several transport operators, the Stop and Go Coalition, earlier announced that 14,000 of its members would participate in what they called a “voluntary” transport protest.

San Mateo described the JAO as “unconstitutional,” calling it a “revenue-generation” measure that was the “work of Congress.”

He said the transport sector was not consulted before the issuance of the joint order which, according to him, may end up being used to extort more money from PUV drivers.

“Sometimes, you just stop to eat a block away from your route and when the authorities see you, they catch you for being out of line,” he said although he admitted that at times, drivers had no choice but to alter their routes for two reasons: It was no longer profitable or the local government unit—without any coordination with the national government—had told them to do so.

In a related development, a transport organization for UV Express vans has asked for a moratorium on today’s implementation of significantly higher fines and penalties for PUV operators, saying more information was needed from a yet to be completed study of the Japan International Cooperation Agency (Jica).

In a letter to the Inquirer, Code-X Transport Federation said that the imposition of higher penalties was “premature and untimely.” The fines, announced by the LTFRB, would significantly increase the expenses of companies that violate their transport franchise and permits.

“We are praying for the deferment of the joint administrative order regarding increased fines and penalties until the Jica study is completed, evaluated and implemented,” it added.

The group cited the Japanese organization’s study which would be the basis for the reopening of new franchise or certificates of public convenience. It added that the same study would be used to determine whether to add or reduce the number of PUVs on a certain route.

“Unfortunately, the Jica study [has] yet to be completed, resulting in a vacuum that colorum operators are trying to fill up,” Code-X said.

It claimed that there were “not enough new franchise to eradicate colorum operators” despite the high demand for vehicles to ferry passengers to and from [their] place of work.

It went on to suggest that PUV operators be allowed some measure of self-regulation.

“As a pilot, deputized officers of some UV Express associations [can] discipline their ranks just like the Kapisanan ng mga Brodkaster ng Pilipinas or KBP,” it said.

“It becomes a win-win situation. The operators and drivers win because they are given the chance to regulate themselves… In doing so, the government may accomplish the task of establishing law and order,” the group added.

Meanwhile, Metropolitan Manila Development Authority (MMDA) Chair Francis Tolentino said yesterday that the agency was ready to cushion the impact of the protest caravan by offering free rides to riders that may end up being stranded.

“We recognize the transport groups’ right to voice their grievances but this should not affect nor greatly inconvenience the rights of the greater majority to conduct their daily business as protected likewise by the general welfare clause in the Constitution,” Tolentino announced in a statement.

According to him, the MMDA will deploy its vehicles, especially buses and trucks, to ferry stranded commuters to their destinations.

At the same time, he encouraged the public to use the Pasig River ferry service as an alternate means of transportation.

Tolentino, who also sits as head of the Presidential Task Force on Transport Strikes and Mass Actions, said the MMDA would deploy all necessary personnel to assist affected motorists and commuters.

The MMDA chief was briefed by Director Carmelo Valmoria, chief of the National Capital Regional Police Office, about the contingency measures to be taken by the police against the protest. With Jeannette I. Andrade and Miguel R. Camus