MANILA, Philippines—As the Philippine National Police prepares for the arrest of three senators charged with plunder over the pork barrel scam, it has sought to kick the Tiamzon couple, alleged communist leaders, out of its detention facility.

But a Manila court hearing the multiple murder case against Benito Tiamzon and Wilma Austria Tiamzon denied the PNP’s motion to have them transferred to a regular jail.

In its motion filed last month, the National Capital Region-Criminal Investigation and Detection Group (NCR-CIDG) asked the court to set aside its own plea to have custody of the couple and issue a new commitment order. 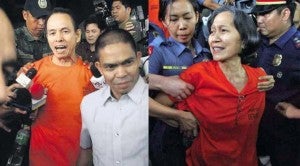 After Benito and Wilma Tiamzon, purportedly the chair and finance officer of the Communist Party of the Philippines, were arrested in Cebu in March, the police told the courts that the “suspects are high value targets and their transfer for detention in a regular jail facility poses a security risk.”

“The commitment order to be issued specifically indicate that the accused remain at the PNP-Service Unit, Camp Crame, Quezon City,” the police said in the Return of Warrant of Arrest.

The NCR-CIDG changed its tune after Chief Supt. Benito Estipona, acting director of PNP Headquarters Support Service, issued a memorandum proposing the Tiamzons’ transfer because the PNP Custodial Center “lacks suitable manpower to secure the facility especially so at this time when high-risk detainees have grown by volume.”

The PNP Custodial Center is a temporary detention unit and overcrowding “is a pressing security concern which needs to be acted upon and preempted before a breach of security occurs,” Estipona said in a memo to the chief of NCR-CIDG, Senior Supt. Roberto Fajardo.

But freshly painted detention rooms were being prepared for Senators Juan Ponce Enrile, Jinggoy Estrada and Bong Revilla, who are facing multiple graft and plunder charges in the Sandiganbayan over the P10-billion pork barrel scam.

Apparently, 16 smaller detention cells were also prepared for other individuals implicated in the misuse of public funds.

Cause-oriented groups Bayan and Karapatan held a rally outside the Manila City Hall on Wednesday to protest the CIDG’s appeal for transfer. They lauded the court for keeping the Tiamzons in the PNP Custodial Center.

“This failed attempt of the PNP reminds us of how the government likewise treated differently accused pork barrel scam queen Janet Lim Napoles and political detainee Andrea Rosal when both needed medical attention,” Bayan Muna said in a statement.

“While Napoles was admitted into the Ospital ng Makati and attended to by her expensive doctors, then pregnant Rosal was not given immediate and adequate medical assistance, resulting in the death of her child two days after being born,” it said.

While the PNP prepared VIP detention facilities for the accused in the pork barrel scam, it wanted to eject political detainees like the Tiamzons “who are fighting the corrupt system that generates massive poverty and social injustice,” it added.