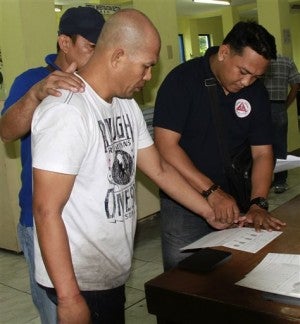 In this photo released by the Philippine National Police Public Information Office (PNP-PIO) in Manila, members of the PNP-CIDG (Criminal Intelligence and Detection Group) take the fingerprints of Khair Mundos, a top commander of the Abu Sayyaf extremist group who is on the US list of most-wanted terrorists, following his capture near Manila’s international airport Wednesday, June 11, 2014. AP FILE PHOTO

ZAMBOANGA CITY, Philippines – The two Abu Sayyaf suspects arrested here on Monday afternoon belonged to a notorious faction that has been operating out of Basilan, a police spokesperson, said Wednesday.

Mundos was recently arrested in Parañaque while Indama has managed to remain at large even after a full-blast military operation conducted in Basilan early this year.

Huesca said Nurilla and Haris took part in the kidnapping of Australian Warren Rodwell in 2011 and US citizen Gerfa Yeatts Lunsman and her son Kevin, in 2012.

He said Nurilla’s involvement in the February abduction of Zamboanga businesswoman Sabrina Voon was also being ascertained. Voon remains in captivity.