Outrage in France over vigilante attack on Roma teen 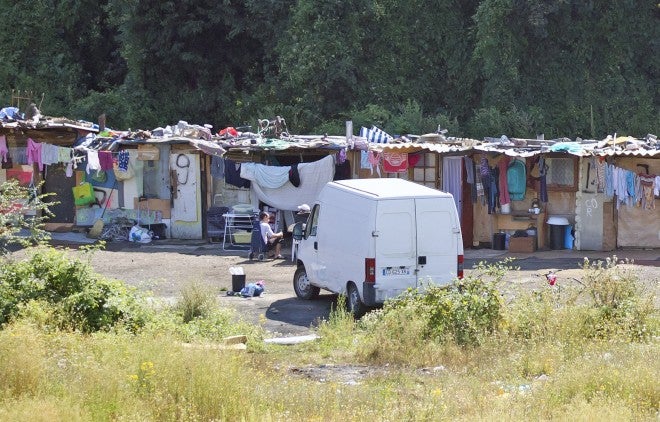 This Aug. 10, 2012, file photo shows a Roma encampment set up near a highway in Clamart, west of Paris. A vigilante attack against a Roma teenager is causing alarm at France’s highest levels, after a group of people who suspected the boy of burglary seized him from his camp last Friday, beat him into unconsciousness and left him for dead. AP PHOTO/MICHEL EULER

PARIS–A brutal vigilante assault on a Roma teenager who is now fighting for his life has shocked France, with President Francois Hollande dubbing the savage beating an “unspeakable and unjustifiable” act.

Accused of robbery, the 16-year-old called Darius was dragged into a basement in a town north of Paris Friday, savagely beaten by a dozen residents of a housing estate and left unconscious in a supermarket trolley where he was later discovered.

News of the attack in Pierrefitte-sur-Seine only came to the fore on Monday, sparking widespread condemnation among the public, rights groups and the country’s leaders.

In a statement issued by the presidency, Hollande asked “that everything be done to find those responsible for this attack” and Prime Minister Manuel Valls also hit out at the perpetrators of the assault.

The teenager, who lived with his family and other Roma in a squalid camp sprung up around an abandoned house, was accused of breaking into an apartment in the estate just hours earlier.

“A group of several people came to find him and take him away by force,” a police source said Monday, adding the boy was then locked in a basement where he was beaten.

Another source close to the case said about “a dozen people” took part in the attack. It was the boy’s mother who alerted police that her son had been kidnapped.

A judicial source, also requesting anonymity, said the boy’s “life is in danger. He is in a coma.”

Prosecutors said Tuesday he had been beaten in the head and also had big bruises on his hands and knees.

“Doctors cannot yet give an opinion on the evolution of his health situation,” Sylvie Moisson, a prosecutor in charge of the case, told reporters.

Michel Fourcade, the mayor of Pierrefitte-sur-Seine, said the boy had been questioned by police several times this month in connection with a string of robberies in the housing project.

This had fueled anger toward the group of Roma, an ethnic minority also known as Gypsies, who had set up camp close to the estate.

Ion Vardu, who lives next to the Roma camp in Pierrefitte-sur-Seine, said some 200 members of the traditionally nomadic community had arrived “three weeks ago.”

On Monday the camp lay abandoned, with rubbish, clothing and mattresses strewn in the garden after the Romas’ rapid departure following the attack on the teenager.

Roma have long been discriminated against across Europe.

They were killed in their hundreds of thousands by the Nazis during World War II, and even now rights organizations have warned of a spike in violence against Roma in Europe.

An April report by Amnesty International slammed European countries for not doing enough to protect their Roma communities, singling out several nations including France.

Many of France’s 20,000 Roma live in extreme poverty in makeshift settlements with little or no access to basic services, such as water.

Their presence in illegal camps on the fringes of towns and cities has often spurred controversy in France where they are accused of being behind a rise in petty crime.

The country also pursues a controversial policy of forcibly evicting Roma from their camps, often paying them to return to their countries of origin, mainly Romania and Bulgaria.

Romania’s foreign ministry on Tuesday asked France to do all it could to bring to justice the perpetrators of the assault on “a minor presumably of Romanian origin.”

France’s SOS Racisme, meanwhile, said the attack was the “obvious result of nauseating tensions faced by our fellow citizens.”

Last year, French authorities evicted a record 19,380 members of the community from camps.

The issue gained international attention and sparked nationwide student protests in October after authorities took a 15-year-old Roma girl off a bus in front of her classmates during a school trip and deported her along with her family to Kosovo.

Valls, who at the time was interior minister, also came under stinging criticism a month earlier when he said most Roma in France had no intention of integrating and should be sent back to their countries of origin.–Marianne Barriaux