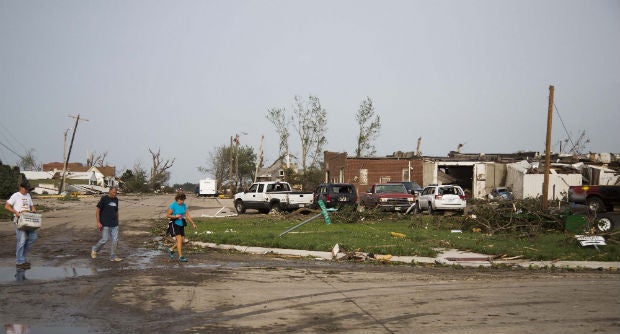 Residents evacuate the town after a tornado severely damaged the area Monday, June 16, 2014, in Pilger, Neb. The National Weather Service said at least two twisters touched down within roughly a mile of each other. AP

• There are only 672 Filipinos in entire state, according to US Census

PILGER, Nebraska — At least one person was killed and 16 others were in critical condition on Monday after massive tornadoes swept through northeast Nebraska, destroying more than half of the town of Pilger, hospital and emergency officials said.

The National Weather Service said at least two twisters touched down within roughly a mile (1.6 kilometers) of each other. Emergency crews and residents spent the evening sorting through demolished homes and businesses in the town of about 350, roughly 100 miles (160 kilometers) northwest of Omaha.

“More than half of the town is gone — absolutely gone,” Stanton County Commissioner Jerry Weatherholt said. “The co-op is gone, the grains bins are gone, and it looks like almost every house in town has some damage. It’s a complete mess.”

Victims were taken to three regional hospitals, and at least one had died from unspecified injuries, hospital officials said.

Faith Regional Health Services in nearby Norfolk was treating 16 patients with critical injuries, and one person had died, said hospital spokeswoman Jodi Richey.

Providence Medical Center in nearby Wayne treated three tornado patients, including two who had lacerations, said hospital spokeswoman Sandy Bartling. Two were released Monday evening, and the third patient was in stable condition, she said.

Meteorologists with the National Weather Service were also tracking a tornado near the town of Burwell, in central Nebraska.