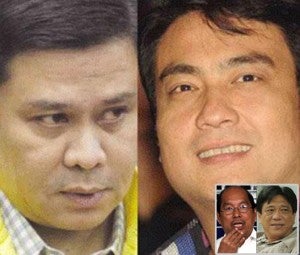 MANILA, Philippines–Senators Bong Revilla and Jinggoy Estrada on Monday twitted the administration for excluding allies of President Aquino from a new complaint to be filed in the Ombudsman over the P10-billion pork barrel scam.

“What I’m looking for is Abad. Where’s Abad? How about Alcala?” Revilla told reporters in a phone-patch interview, referring to Budget Secretary Florencio Abad and Agriculture Secretary Proceso Alcala.

Revilla, Estrada and Sen. Juan Ponce Enrile, all from the opposition, have been indicted for plunder and graft in the Sandiganbayan for allegedly pocketing millions of pesos in kickbacks from phantom projects funded with their shares of the pork barrel or Priority Development Assistance Fund (PDAF).

Revilla said it appeared the government was treating people implicated in the scandal differently.

Estrada observed that Director General Joel Villanueva of the Technical Education and Skills Development Authority (Tesda), a former party-list nominee to the House of Representatives, seemed to be the administration’s “sacrificial lamb.”

“This is just tokenism,” Estrada told reporters in a phone-patch interview.

He said the exclusion of the administration’s other allies from the information smacked of “selective justice.”

Coloma advised the public to just wait for the action of the Department of Justice on the third batch of cases to be brought against those responsible for the massive theft of public funds.

The Inquirer reported on Monday that the National Bureau of Investigation would file in the Office of the Ombudsman this week a complaint for malversation against Sen. Gregorio Honasan II, Villanueva and eight former and current members of the House for misuse of the pork barrel from 2007 to 2009.

Also to be charged with malversation is businesswoman Janet Lim-Napoles, the alleged mastermind of the pork barrel scam who is already facing plunder charges in the Sandiganbayan together with Revilla, Estrada and Enrile.

Justice Secretary Leila de Lima did not comment Monday on the Inquirer report, saying only that she would meet with NBI officials Tuesday to discuss the date of the filing of the case.

“I can neither confirm [nor] deny that,” De Lima told reporters, reminding them of her policy of not identifying people to be charged before the filing of cases.

Of those to be charged, only Villanueva is a member of the President’s Liberal Party.

Except for Honasan, an independent, all have publicly denied any wrongdoing.

Honasan’s staff said on Monday that he would keep his silence on the matter.

Estrada said Abad should be included in the information as Napoles’ “mentor.”

He maintained that House Deputy Speaker Neptali Gonzales II should be included in the complaint.

“I stand by my belief that there is selective justice,” Estrada said. “If you are lazy to gather . . . evidence against those involved, especially the allies of the administration, nothing will happen.”

If the agents were just as determined to gather evidence, the President’s allies would end up being charged, too, Estrada said.

Estrada expressed puzzlement over why Villanueva would be the only administration ally to be charged.

“What kind of investigation is that? There are so many of them involved. For instance, Gonzales. His office implemented his own PDAF. How can that happen?” he said.

In a special audit of the PDAF from 2007 to 2009, the Commission on Audit said that lawmakers used local governments as conduits for their pork barrel. It found P426.5 million flawed transactions in Mandaluyong City involving the PDAF allocations of Gonzales.

Give Aquino a break

House leaders on Monday urged the besieged Cabinet members to give President Aquino a break from defending them and start fending for themselves.

“They should defend themselves and not rely on him. They presumably know the facts as well as their best defense,” Speaker Feliciano Belmonte Jr. said.

Leyte Rep. Ferdinand Martin Romualdez said: “I pity the President for constantly defending his men in the pork barrel scam, which I find very unusual, because normally they should be the ones covering for the President.”

Romualdez suggested that Abad and Alcala spare the President further grief and stress by resigning or going on leave.

“These are very worthwile options they can take to keep their offices beyond reproach,” Romualdez said.

He also said the justice department and the Ombudsman should be “sensitive” to the public perception that the President is coddling his Cabinet, as mostly opposition members have been charged so far in the pork barrel scam.

“There should be no pussyfooting, otherwise selective prosecution will persist because only opposition lawmakers are being charged right now,” Romualdez said.–With reports from Christine O. Avendaño, Christian V. Esguerra and Gil C. Cabacungan

Protesters zero in on Aquino, allies