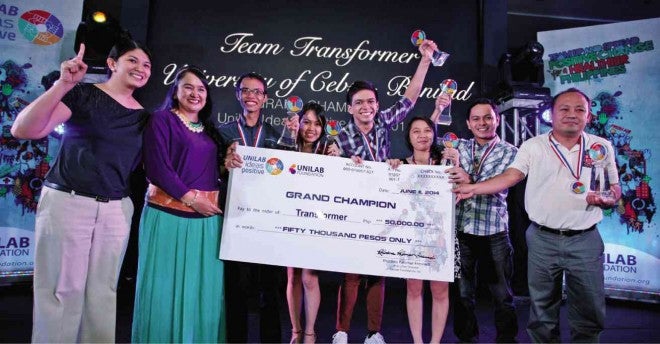 When a team of honor students from the University of Cebu-Banilad offered to help a broom-making community with its “problem,” it was surprised by the lack of interest from the prospective beneficiaries.

Team member Jeanette Cabahug, a 28-year-old former overseas Filipino worker (OFW), said  she was shocked when, on their first visit, a resident of Sitio Lapyahan in Barangay Labogon, Mandaue City, said, “Sanay na kami,” when the team called attention to the prevalence of coughs and colds in the community.

Cabahug, a business administration student, said: “It was like we were the problem …That they did not recognize the problem made me wonder if we were in the right community.”

The former OFW was one of five members of Team Transformers of the University of Cebu-Banilad, which decided to make Lapyahan the beneficiary of a project for the Unilab Ideas Positive contest.

The project, Angat KKK (Kapaligiran, Kalusugan at Kabuhayan), bested 13 other entries from all over the country to win the grand prize of P50,000.

The residents of Lapyahan, a coastal community, make brooms out of palm fronds. The broom makers soak the buli fronds in ponds of dirty, stinky seawater for a month to soften the fibers. The water in the ponds is replaced only during high tide.

For half a day and in almost all kinds of weather, the workers harvest palm fronds. They spend hours submerged from the waist down in the ponds, cleaning the leaves. The more bundles they clean, the more they earn.

Hours spent soaked in the water make the workers vulnerable to upper respiratory tract infections, which the Angat KKK project sought to address.

Rheyz Michael Campilan, 26, a registered nurse taking up accountancy, knew that the working conditions were to blame for the respiratory ailments but residents said in resignation, “This is normal.”

Under its project, the five-member Team Transformers provided goggles, face masks and a few other things to the community. Its modest efforts reduced infections from 44 to 7 in the community of 33 families. Aside from Cabahug and Campilan, the team consisted of team leader Jerome Cuyos, an accountancy student, and business administration students John Paul Preston and Sharmaine Grace Tabal.

He said, “We were not into social work but we learned that anyone can be a light for  others in the dark.”

The team found out that the community was wary of do-gooders.

Cabahug said, “Foreigners … and local organizations came to gather data and never returned.” Lapyahan residents told them, “Pare-pareho lang kayo (You are all the same).”

“It became clear to us then that the mindset had to change,” said Cuyos.

After the team was named one of 14 finalists and given P100,000 seed money for its project, it thought the project would proceed without a hitch. But the community was unimpressed when presented with the original plan for Angat KKK.

It was only after two forums and three adjustments that the team was able to draw up a plan acceptable to the community.

“If you want to deal with people, you have to listen to them… You have to gain their trust,” Campilan said.

From December to April, the team spent Saturdays in the community, juggling academics and their project work.

They conducted medical missions and organized activities for the children,  and contests like the search for the cleanest ponds, among other things.

Through the project, broom makers got nipa sheds to protect them as they did their work. Trash bins were provided and ponds were cleaned regularly after the soaking process.

The ponds were also fenced off and were now deeper, increasing three-fold the volume of fronds cleaned. As a result, one worker said his income increased from P150 to P300.

Cabahug said she had  plans to work abroad again after graduating in 2015 but the project changed her mind.

“The changes in Lapyahan are remarkable and gave me true joy … Before, I wanted to be rich, that’s why [I wanted to] work abroad,” she said.

“Ideas Positive is a contest about outcomes,” said Rhodora Palomar-Fresnedi, executive director of project sponsor Unilab Foundation. She said the four-year-old program “is restoring faith in the youth.”

Aside from Team Transformers, the other Top 5 winners were the University of the Philippines Visayas, which had two programs—a deworming campaign among Aeta children in Guimaras province and an income-generating health cart—STI San Pablo’s breast cancer awareness campaign and the University of Santo Tomas’ pneumonia awareness drive.

Project head Karen Joaquin-Singian said: “Among all the teams, [Team Transformers] had the community with the most [serious] problems … But every single week, the team  spent time there. It had the best use of the seed money [by providing] training and support.”

Angat KKK has since recruited about 50 student volunteers, which, mentor Christopher Biore said, would make it  a template for bigger school movements.

“You can do something. You can’t always blame the government,” Cuyos said. The team  vowed to continue visiting the community at least once a month at the workers’ request.