National, local rivals ganging up on us, says Mayor Binay 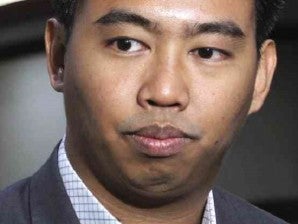 In a press conference on Monday, the mayor alleged that sometime this week, his family’s political opponents in Makati would file “politically motivated” complaints in the Ombudsman accusing him, his father Vice President Jejomar Binay, and sister Makati Rep. Abigail Binay of plunder and graft.

“This plan validates reports that my father’s political enemies at the national level have reached an agreement with our long-time Makati opponents. They have joined forces to besmirch my father’s reputation, because of the upcoming 2016 presidential elections,” Binay said.

While Binay declined to name the complainants, the Philippine Daily Inquirer learned that it would include Mayor Binay’s sole rival in the 2013 elections, independent mayoral candidate Renato Bondal.

Bondal, sought for comment over the phone, confirmed he will be filing the complaints, but could not confirm it would be within the week. Bondal firmly denied he was affiliated with any political party.

Binay said his family learned of the alleged complaints last week, shortly after Liberal Party (LP) member and Caloocan Rep. Edgar Erice gave a privilege speech on Tuesday denying the LP’s hand in any demolition job against the Binay family.

Erice also gave a television interview on Friday, in which he said he would leave it up to local politicians to file complaints against the Binays.

“But even before he said that, we already learned of the prepared complaints against our family,” Mayor Binay said. He described the “suspicious” series of events as “like a script in a movie.”

While declining to give the media copies of these draft complaints, Mayor Binay said that one would be a plunder complaint against him, Vice President Binay, former and present city officials, alleging that the newly constructed city hall parking building was overpriced by around P1 billion.

He said the other complaint would be for graft against Representative Binay and against him, regarding allegations in the “white paper.”

“Representative Abby has already responded to these allegations and I will no longer repeat them. I would just like to add that the city government of Makati is a recipient of the PDAF just like other senators and congressmen. All of it goes through the Commission on Audit,” the mayor said, adding there were complete documents proving the projects had been implemented.

“We are prepared to face whatever complaints they will file against us. The truth is on our side. We are just calling for fair treatment from the involved government agencies,” Mayor Binay said.

“The public will see that all of this is just a demolition job. This isn’t about accountability. This is about the 2016 presidential election,” the mayor said. He added the “intrigue” has not affected the relationship between Vice President Binay and President Aquino.

Bondal, however, denied the complaints were black propaganda against Vice President Binay. “I don’t care about the national front. I don’t know Erice. Neither me and my fellow complainant are from the Liberal Party,” he said, adding that he and his co-complainant were former Makati barangay chairmen.

Bondal declined to detail the complaints before the filing, but said “It’s an honest to goodness complaint. [The Binays] should just answer it,” he said.

Asked about the timing of the complaints, Bondal denied the cases had anything to do with the upcoming 2016 elections. “I think this is the opportune time. Corrupt politicians are now being purged [from the ranks], and I want to help. I’m confident the Ombudmsman is straight as an arrow. If [the Binays] get hit, I can’t do anything about that,” Bondal said.

Bondal said the complaints are still being refined, and that he was still waiting for “a friend” to confirm joining him as a complainant. “If he will be joining tomorrow, we can file this immediately,” he said.