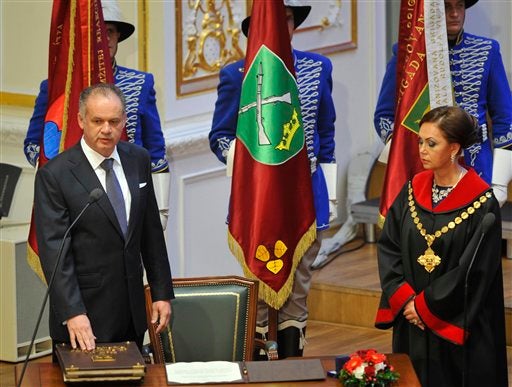 New Slovak President Andrej Kiska, left, takes his presidential oath in the presence of the chairwoman of the Constitutional Court Ivetta Macejkova, right, at a ceremonial parliamentary session in Bratislava, Sunday, June 15, 2014. Kiska is the fourth head of state since the establishment of independent Slovakia in 1993. AP PHOTO,CTK/JAN KOLLER

BRATISLAVA, Slovakia–Millionaire-turned-philanthropist Andrej Kiska on Sunday celebrated his inauguration as Slovakia’s first president without a communist past by inviting homeless people to sit side-by-side with lawmakers at a ceremonial lunch.

“I will be Slovakia’s first president without a political past. I will be there for all people, regardless of their political affiliation and nationality,” Kiska said in his first speech as head of state.

The 51-year old tycoon, who made his fortune in the consumer-credit business in the 1990s, founded the country’s biggest charity, “Good Angel,” which helps terminally ill children and their families.

He has also vowed to donate his presidential salary to charity for the entire five-year term.

Fifteen homeless people, as well as children from foster homes and senior citizens, attended the sumptuous lunch at the president’s new palace on Sunday in a nod to what Kiska said will be the hallmark of his leadership.

“I will open the presidential office to people who need our help, they will be my priority,” he said earlier this week.

Emerged out of nowhere

A non-aligned centrist, the political newcomer emerged out of nowhere to win a landslide victory in a March election, preventing veteran leftist Slovak Prime Minister Robert Fico from tightening his grip on power.

Kiska is the country’s fourth president since independence in 1993, and its first without a history of allegiance to the Communist party.

Widely regarded as a self-made man with a nose for business, he capitalized on his image as a political novice untainted by the corruption that has ravaged the ex-communist country of 5.4 million.

He will take over as president from leftist Ivan Gasparovic, 73, who spent two five-year terms in the office.

Though the office is largely ceremonial, the president ratifies international treaties, appoints top judges, including the supreme court chief justice, and is the commander in chief of the armed forces.

The head of state can also veto laws passed by parliament.

While Kiska has no political track record, analysts believe his election signals continuity for Slovakia’s staunchly pro-European course after it joined the European Union in 2004 and the eurozone in 2009.

“Kiska is less experienced, but is a mainstream democratic politician,” said Bratislava-based analyst Grigorij Mesezenikov, noting that the millionaire has “free-market values and his foreign policy outlook is pro-Western”.

Kiska has vowed not to seek any open conflict with Fico, whose party has a majority 83 seats in the 150-member parliament until the next general election in 2016.

Analysts predicted Fico could have tried to amend the constitution to boost presidential powers and transform the parliamentary system into a presidential one if he had won.