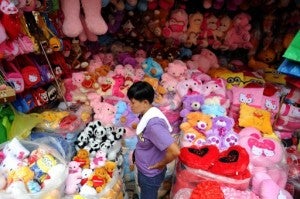 MANILA, Philippines — A locally manufactured doll bought from a retail store in Divisoria, Manila, was found tainted with a group of chemicals known to interfere with normal endocrine and hormone functions, a toxics watchdog said on Sunday.

In a recent test buy conducted by environment group EcoWaste Coalition, it discovered that a sample doll bought from Divisoria contained an illegal level of synthetic chemicals called, phthalates which are mostly used as softening agents in plastic products like toys.

EcoWaste noted that these chemicals could cause endocrine or hormone problems to infants and children who were usually exposed to these toys.

Thony Dizon, EcoWaste Project Protect coordinator said that the group became curious if the dolls sold in local stores in the metro were safe from phthalates after European countries took measures to stop the entry and sale of toys especially dolls laced with these toxic chemicals.

Dizon noted that 18 countries in Europe have banned 165 dolls containing phthalates since 2013 but expressed dismay that the same action has not been taken here in the country.

“This prompted us to buy and send one sample to the laboratory for analysis. We would have wanted to test more products, but the cost of analysis is too prohibitive at over P7,500 per sample,” he explained.

The EcoWaste coordinator explained that they bought a doll from the “Little Ones Nap Time Doll Crib Set,” a product made by the Navotas-based New Anding’s Trading and Manufacturing and sol for P100 per set.

Based on the laboratory test carried out by SGS, a global testing, verification and certification company, the doll head alone contained about 16 percent of phthalate, way above the 0.1 percent mark set by the Department of Health (DOH).

Through Administrative Order 2009-0005-A, the DOH declared unlawful the manufacture, sale and distribution on children’s toys that contain more than 0.1 percent phthalate.

The World Health Organization in a study conducted in 2013 revealed that phthalates have been found harmful to female fertility and could cause childhood illnesses like leukemia.

“We have sent a formal complaint last week to the Department of Trade and Industry regarding this finding prompting DTI Undersecretary Victorio Mario Dimagiba to endorse it to the Food and Drugs Administration for verification and investigation,” Dizon noted.

In line with this call for action from the government, EcoWaste also appealed to makers and sellers of dolls and other plastic toys to comply with the DOH regulation and to properly label their products.