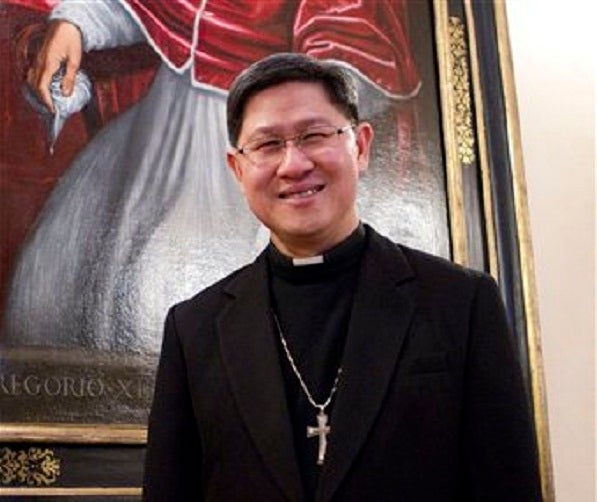 “The government officials who steal public funds have the gall to do it, as they are thick-faced, insensitive, very brave,” Manila Archbishop Luis Antonio Cardinal Tagle said on Saturday, urging Catholics to help promote good government.

“But that is not the kind of bravery being asked of us,” Tagle said, addressing the Good Governance Forum for Lay Leaders at the Santuario de San Vicente de Paul Shrine in Quezon City.

The forum, which had the theme “We choose to be brave: Filipino lay leaders are today’s good governance advocates” and organized by the Diocese of Novaliches, was attended by lay leaders and good government advocates from 67 parishes in the cities of Quezon and Caloocan.

The forum was held a week after three senators and 35 other people, including former members of the House of Representatives and former government officials, were indicted for plunder and graft in the Sandiganbayan over the P10-billion pork barrel scam.

Among those charged was businesswoman Janet Lim-Napoles, who allegedly orchestrated the massive theft of public funds through fake foundations in connivance with lawmakers and heads of government agencies.

“Filipino lay leaders are today’s good governance advocates. Pro-God, procountry, proenvironment. That is where we should use our bravery,” Tagle said.

“Sometimes, we become cowards [and fail] to respond to calls for us to do what is good. But when it comes to doing foolish or mischievous things, we’re very creative, very brave. That is not what is being asked of us,” he said.

According to the forum organizers, the event was aimed at engaging lay leaders and good government advocates in electoral, community education, legislative and pastoral accompaniment in politics.

“We believe that evangelization in this sphere is of utmost importance, especially in preparation for the crucial 2016 elections,” the organizers said in a statement.

“In the Year of the Laity, the Church awakens to the call to ‘choose to be brave’ and is propelled to respond to a saintly mission and act heroically. With the Parish Pastoral Council leaders, Basic Ecclesiastical Community members and all Good Governance advocates from various ministries and organizations, we stand to claim a better Philippines today,” they said.

Instead of blaming government officials for the controversies that hound the nation, Filipinos must look at themselves first, he said, adding that all citizens have an obligation to fulfill in improving the country and themselves.

Tagle urged the laity to do their part in promoting good government by letting themselves be governed by the personal values of fairness, empathy, stability and integrity.

“The word ‘govern’ means management and giving a sense of direction. Even not in politics, in our families, schools, businesses, church—all of us have, in a way, a role in upholding good governance. It is important that we learn good governance on the basis of our faith so that we can use it in governing our country,” Tagle said.

“We no longer know whom to trust. Everyone, individual or institution, promises to provide a better life. But these usually are broken promises,” he said.

“You do not know whom to trust anymore, and … we need good governance to restore the people’s trust in their fellowmen and in the institutions,” he said, adding that people and nations get paralyzed when trust is violated.

In order to achieve good governance, be it in the government, institutions or the church, Filipinos should vote in the 2016 elections for people with competence, professionalism and love for country, and those who will serve for the common good, Tagle said.

“One sign of good governance is competence,” he said. “Sadly, our system of governance does not totally depend on competence but on protection.  Anyone, even incompetent, as long as he is a friend of the mayor, gets the position. That’s why he busies himself not with his mission but with protection, connection and promotion. This should change.”

Tagle cited the importance of professionalism in running the national and local governments and organizations.

Without professionalism, “no policies are set in place,” he said. “Everything is internal arrangement, private arrangements, that’s why high-profile prisoners, including drug dealers, and their relatives go in and out of prison. What is the real procedure? Let us be professional.”

Good government, Tagle stressed, is promoting the good of all.

“If you love your country, you will not do anything that will put your country to shame,” he said.

During the press conference on the the 51st International Eucharistic Conference last week, Tagle said the pork barrel scam was not just about corrupt politicians, but also about how parents planted the seeds of corruption in raising their children at home.

Instead of pointing the finger at a small group of people, everyone must engage in soul-searching and in communal examination of conscience to discern the status of the Filipino culture and how it can be “purified,” Tagle said.

“I just wish that we would set it in a wider context, not only of the politicians but also of the whole country and the whole Filipino culture,” he said.

Read Next
Revilla still hot on Palace run
EDITORS' PICK
PH back to low-risk status for COVID-19
Work-From-Home is here to stay and requires reliable logistics
EDITORIAL: Power play
Legarda emphasizes role of ICC/IPs in nation building this IP month
USAID Opportunity 2.0 calls for applicants for grants for out-of-school youth engagement
P120.22 billion COVID-19 funds still unspent as of end-September
MOST READ
Isko to critics after remarks vs Robredo: I’m sorry, this isn’t about Mr. Congeniality
PBB housemate Brenda Mage called out for sexual joke to Eian Rances
Martires asks why he is being singled out over issues on releasing SALNs
Why the Marcos brand remains popular
Don't miss out on the latest news and information.