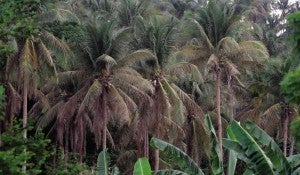 SULU, Philippines—A 1,300-hectare coconut plantation in Siasi town, for years occupied by an agricultural company identified with Sen. Juan Ponce Enrile, is ready to be broken up and given to 273 farmers, according to the provincial agrarian reform office.

Cocoland is allegedly one of the dummy corporations set up by Enrile to gain control of large tracts of land in Mindanao during the martial law years.

The Inquirer called Enrile’s office on Friday for comment. There was no comment from him or his staff as of press time Friday night.

Enrile served as chair of the Philippine Coconut Authority (PCA) in the martial law administration of President Ferdinand Marcos.

Undug declined to say how such a large tract of land, previously classified as public land, came under the control of a private company.

Local residents said Cocoland Plantations had been administering the property since the 1970s.

Undug said the plantation was placed under the agrarian reform program in 1989.

But the distribution was stalled by disputes, including Cocoland’s demand that the Department of Agrarian Reform (DAR) separate from the land valuation the coconut trees on the property. Cocoland wanted separate payment, or corporate refund, for the coconut trees.

It was unclear how and when the disputes were settled, but Undug said the property was ready for distribution.

The Inquirer learned that Cocoland Plantations, based in Tumahubong village in Lamitan town, Basilan province, has been placed under the control of a local farmers’ group, the Land Reform Beneficiaries of Basilan Co-op Inc. (Larbeco).

Larbeco, cooperative sources said, has entered into a partnership deal with Cocoland under which Cocoland will continue to administer and manage the plantation.

The cooperative official, who requested not to be named for lack of authority to speak about the matter, said that under the agreement, Cocoland retains major management decision-making power over the property.

Undug said the 273 farmers to whom the land would be given had formed an agrarian reform community.

Such a community receives technical and financial assistance from the government to ensure the profitability of the land after distribution.

Gov. Mujiv Hataman of the Autonomous Region in Muslim Mindanao (ARMM) said he had signed certificates of land ownership (Cloa) for the farmers benefiting from the distribution of the plantation.

Undug said the titles would be released after the farmers and the DAR had determined what support the agrarian reform community needed.

Aside from the Cocoland plantation, Hataman said the DAR also placed under the agrarian reform program corporate lands, including land owned by San Miguel Corp. in Sultan Mastura town, Maguindanao province, and what used to be an oil palm plantation controlled by Kenram Philippines in Pandag town, also in Maguindanao.