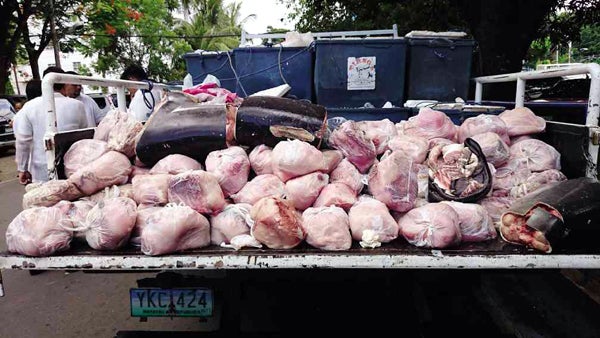 A TRUCKLOAD of shark meat from Siaton town, Negros Oriental province, is seized in Naga City, Cebu province, where the shark trade has been outlawed by the provincial government. GARY CASES/CONTRIBUTOR

DUMAGUETE CITY—Have you ever tasted shark meat? If you’ve tried those fish balls along Rizal Boulevard here and in a myriad of other places in the country, chances are, you have!

The shark meat trade is apparently alive and well, as evidenced by the apprehension of a shipment of thresher shark (Alopias pelagicus) meat on Wednesday night in Naga City, Cebu province.

A truck carrying at least 467 kilograms of thresher shark meat, 170 pieces of plastic bags containing shark skin and a shark torso was intercepted in Naga City around 10:30 p.m. on Wednesday while heading for a fish ball processor in Lapu-Lapu City on Mactan Island in Cebu.

Loy Madrigal, head of the Cebu Provincial Anti-Illegal Fishing Task Force (CPAIFTF), said a tip from a concerned citizen prompted the task force to set up a checkpoint in Barangay Poblacion, Naga City, some 20.2 kilometers south of Cebu City.

CPAIFTF members flagged down trucks that passed by Barangay Poblacion and inspected their cargo.

But Allan Empinado, driver of an Isuzu Elf with license plate YKC 424, refused the inspection, prompting task force members to be suspicious.

When task force members checked the truck, they found the shark meat.

Documents yielded by the driver showed that the shipment came from Siaton town and was supposed to be delivered to an establishment called “Tirso’s Tempura” in Lapu-Lapu City.

Empinado and his two helpers—Gerry Atillo, 24, and Daniel Amistoso, 61—were detained at the Naga police station and will be charged with violating an ordinance that bans the capture and sale of thresher sharks.

While there is no national law in the Philippines banning the trading of shark meat, the provinces of Cebu and Batangas have passed local laws against it.

Negros Oriental province does not have a similar law, so shark hunters remain untouched.

Gary Cases, a member of the Thresher Shark Research and Conservation Project, said last Wednesday’s shipment was the biggest haul that his group has recorded.

Cases said thresher sharks were classified as endangered. It usually takes 11 years for a shark to mature. It can only give birth to two offsprings.

Thresher shark meat, according to Cases, is the cheapest fish meat that can be made into fish balls, squid balls and tempura.

“It’s the one preferred for fish balls because it is good meat, has a texture like scad and is cheaper,” he said.

Madrigal said the confiscated shark meat was buried in compliance with an ordinance that bans the consumption of shark meat.