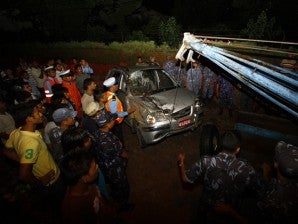 The quake, with a preliminary magnitude of 6.9, was felt across northeast India including the capital of New Delhi. It triggered at least two aftershocks of magnitude 6.1 and 5.3, Indian seismology official R.S. Dattatreyan said. He warned more aftershocks were possible.

The full extent of damage was not immediately known because the region is sparsely populated with many living in remote areas which were cut off by mudslides triggered by the quake, Singh said.

Rescuers were working overnight to search for anyone pinned under fallen buildings in the city, which has a population of 50,000, Singh said.

“We have sounded a high alert. Police are on the streets in Gangtok and other major towns,” he said.

Electricity and some phone service was interrupted in the area.

In neighboring Nepal and Bangladesh, the quake sent residents rushing out of their homes, offices and shopping centers.

In Nepal’s capital of Kathmandu, members of parliament who were debating the national budget ran out of the assembly hall into a parking area. They returned 15 minutes later and resumed their session.

The quake was also felt as far as the Indian capital, with New Delhi residents also rushing out of shaking buildings.