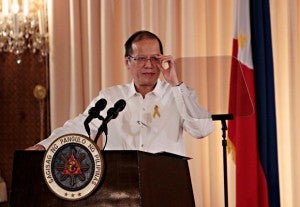 MANILA, Philippines—President Benigno Aquino III fired back, on Thursday, against opposition senators claiming that the plunder charges filed against them in connection with the pork barrel scam were politically motivated.

Taking a swipe at these unnamed “prominent personalities,” the President then urged voters to go for candidates “who can fight for the interest of every citizen” during the 2016 elections.

“Hindi natin kailangan ng magaling bumigkas ng script, mahusay sumayaw, o kaya magaling kumanta. Pananagutan nating mag-iwan ng mas makatarungan at mas maunlad na Pilipinas kaysa ating dinatnan (We do not need those who are great at reading scripts, who dance or sing well.  It is our responsibility to leave a just and progressive Philippines,” he said in a speech on the 116th Independence Day celebrations in Naga City, Camarines Sur.

The President defended the government’s case against those allegedly behind the pork barrel scam, after Senators Ramon “Bong” Revilla Jr. and Jose “Jinggoy” Estrada assailed his administration in separate privilege speeches this week.

Revilla earlier asked Aquino to govern with “love, not hate” in a highly criticized privilege speech that included an audio-visual presentation. It showed the actor-senator greeting supporters with his “original song” playing in the background.

Last Wednesday, Estrada cried foul over what he called “selective investigation” conducted by the Department of Justice and the Commission on Audit into the pork barrel scam.

Estrada and Revilla, along with Sen. Juan Ponce Enrile, are facing arrest for alleged plunder.

In his speech, Aquino recalled that news of pork barrel allocations being channeled to fake foundations first came out during the 2013 elections.

He said he had instructed Justice Secretary Leila De Lima “not to make any accusation until there is sufficient evidence.”

“We could have done this in haste without any strong basis just to destroy the names of those linked to the controversy, but we went through the right process in ferreting out the truth,” he said in Filipino.

“But now, we’re the ones being accused of politicking? It’s up to you to decide whom you will side with in this issue.”

Aquino calls on nations to unite, not impose