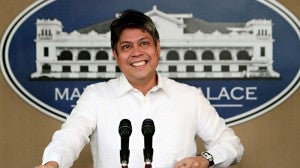 MANILA, Philippines – Presidential Adviser on Food Security and Agricultural Modernization Francis “Kiko” Pangilinan in a television interview on Tuesday said he would suggest to President Benigno Aquino III to sack Agriculture Secretary Proceso Alcala if he would be found guilty of benefiting from the P10-billion pork barrel scam.

“Yes, ‘yun ‘yung utos ng pangulo eh (Yes, that’s what the President wants me to do.),” Pangilinan said when Karen Davila, host of ABS-CBN’s Bandila, asked him if he would ask the president to expel Alcala from his post should he be found liable in the scam.

Pangilinan, however, maintained that he did not believe Alcala funneled his funds to the bogus non-governmental organizations supposedly set up by alleged pork barrel scam mastermind Janet Lim Napoles. He also said that Alcala doesn’t need to resign from his post amid plain accusations that he transacted with Napoles.

Pangilinan was appointed by Aquino in May 2013 to head several organizations formerly solely handled by Alcala in the Department of Agriculture. In the same interview, he maintained that he was the Robin to Alcala’s Batman. Jersy Hortaleza

Pangilinan: Coco levy won’t be used in war vs pest