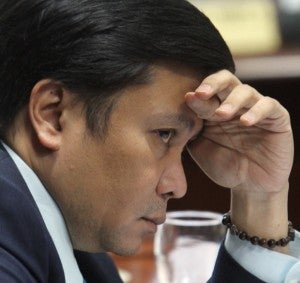 Sen. Jinggoy Estrada: Money did not pass through us INQUIRER FILE PHOTO

MANILA, Philippines–Sen. Jinggoy Estrada on Tuesday scoffed at the notice sent by the for him to refund the millions of pesos in kickbacks that he allegedly pocketed from the

“How can the COA issue us, the legislators, notices of disallowance? Money did not pass through us. Unless they can prove there was collusion between the legislators, the implementing agencies and the departments,” Estrada told reporters.

If at all, Estrada said the COA should have sent the notice of disallowance to the implementing agency. He said his lawyers would appeal the matter.

“We’re not holders of the money. If we’re holding the money, that’s OK, they can issue. But we’re not the custodians of funds,” he said.

Sen. Bong Revilla, through his counsel, has questioned the notice of disallowance.

“We filed the required appeal memoranda and even paid the exorbitant and wrongful filing fees of P20,100 per case,” lawyer Joel Bodegon said in a text message.

Bodegon maintained Revilla had nothing to do with the scam and therefore the disallowance “has absolutely no basis in fact, and under the law and regulation.”

Enrile’s lawyers had said they would study how to respond to this. Tan said last year that the COA would issue thousands of NDs after a special audit showed that P6.2 billion in pork barrel was transferred to 82 NGOs from 2007 to 2009, including at least eight that had links to Janet Lim-Napoles.

Estrada, meanwhile, manifested on the floor that Sen. Juan Edgardo Angara, his vice chair on the labor committee, be tasked with hearing bills pending in the committee, and Sen. Pia Cayetano be in charge of pushing for the bill against discrimination, should he be incarcerated over the scam.