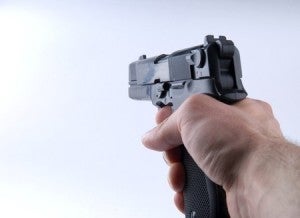 CAMP VICENTE LIM, Laguna—Little did Nilo Baculo Sr. know he would not get off his motorcycle alive.

The veteran radio reporter, who five years ago was denied by the court a protection order following alleged threats from elected officials in Oriental Mindoro province, was gunned down near his home in Calapan City on Monday—at least the 24th media worker slain under President Aquino’s administration.

Baculo, 67, was on his motorcycle when gunmen, riding tandem also on a motorcycle, blocked his way and shot him at noon in Barangay (village) Lalud in Calapan, according to the police.

Baculo, who had hosted a hard-hitting program “Isumbong Mo kay Ka Nilo” (Tell It to Nilo) on radio station dwIM in Calapan, was about 500 meters from his home when he was attacked, according to Leo de Leon, a reporter of another radio station, dzSB 104.1 Spirit FM, who arrived at scene after the killing to cover the incident.

Baculo was shot twice in the body and declared dead on arrival in hospital, according to Supt. Glicerio Cansilao, the city police chief.

Cansilao said Baculo was no longer a practicing journalist at the time of his assassination, having stopped hosting his radio program for months now.

Local journalists in Calapan, who asked not to be identified due to the sensitivity of the case, described Baculo as “controversial.”

In 2008, Baculo sought a writ of amparo, claiming local officials involved in the illegal drug trade were out to kill him.

His was the first writ of amparo the Supreme Court had issued in favor of a journalist, according to lawyer Harry Roque, Baculo’s counsel then.

When the case was remanded to the Court of Appeals to determine the propriety of a protection order, the appellate court denied Baculo’s plea for lack of evidence to support the claims of threats to his life, Roque said.

A journalist to the end

“Nilo was not another journalist killed … His killing today is what happens when the court errs in its appreciation of evidence,” Roque wrote on his blog after Baculo’s killing.

Contrary to police claims, the family of Baculo insisted he remained a journalist and that his killing was related to his job.

According to Baculo’s eldest son, Daniel, 23, his father was still a reporter of radio station dwIM but the station halted operations recently due to a change in management.

Baculo was also the publisher of local newspapers such as Isumbong Mo kay Ka Nilo, Travelers’ News, and Haplit Latigo.

In fact, Daniel said, his father had just gone to the provincial capitol to get “subscriptions” for his paper and was on his way home when he was gunned down.

“Right now, we do not want to say anything yet about who might have ordered him killed. Just look at my father’s record and you’d know how critical he was of corruption in the government,” Daniel said.

He said the family was appealing to the police and the government to solve his father’s killing.

The Center for Media Freedom and Responsibility (CMFR), in a post on Feb. 5, 2008, on its website, said Baculo  hosted his “Isumbong Mo kay Ka Nilo” public affairs program in dwIM from 1995 to 2001 and then transferred to dwAW Batangas in 2002.

The CMFR said Baculo also published the weekly Travelers’ News where he had a column under the same title as his radio show. He also served as the business manager of the Pacific Review, a Batangas City-based publication.

The police, however, ruled out Baculo’s job as broadcaster as a motive for the killing.

“He was known to have earned a lot of enemies. It’s more of a personal [motive],” said Senior Supt. Ronaldo de Jesus, Oriental Mindoro police director.

Baculo was the 166th Filipino journalist killed since 1986, the year democracy was restored in the country after years of martial law.