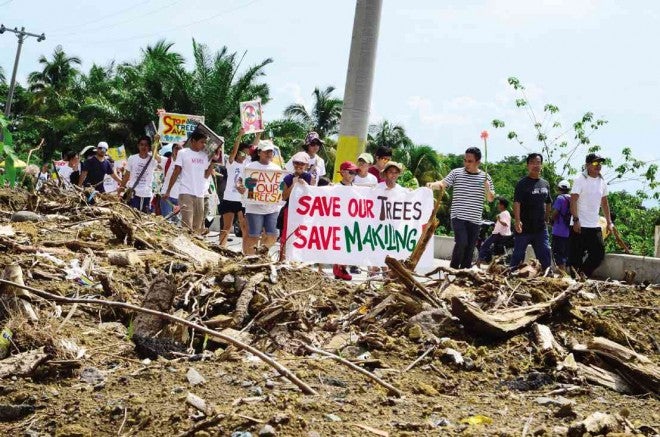 ARTISTS, environmentalists, photographers, professors and students of Los Baños join a march on Sunday protesting the cutting of trees in Mt. Makiling to give way to road widening. AL BENAVENTE/CONTRIBUTOR

LOS BAÑOS, Laguna—Markings on at least 300 trees in Mt. Makiling have alarmed the local arts community here, raising fears that these will be cut down to clear the way for a government road-widening project.

Both the Department of Environment and Natural Resources (DENR) and the Department of Public Works and Highways (DPWH) in the province confirmed on Sunday that the trees were numbered as part of an “inventory” of trees blocking the ongoing widening of the 5.6-kilometer road in Barangay Timugan that crosses through Makiling.

An inventory is required before the DENR in Calabarzon (Cavite, Laguna, Batangas, Rizal and Quezon) issues a permit to clear the road to the DPWH, the project’s implementing agency.

DENR-Laguna director Isidro Mercado said in a phone interview that the department marked the trees last week but could not give an exact figure as he had yet to receive a copy of the record.  He was quick to downplay environmental concerns, saying his office would still assess if the tree cutting is necessary.

The numbers on the tree trunks were painted red. Seasoned photographer and Los Baños resident Alex Baluyut said he counted up to 300 trees that were “numbered.”

On Sunday morning, about 50 photographers, artists and members of the academe marched from the municipal hall to the project site to oppose the tree cutting.

They camped under some shade for poetry reading and discussions on the issue. Some, with children in tow, painted over the markings “hearts” and messages to stop the tree cutting.

“We are looking at a series of events to let them know that we are keeping an eye on this project,” Baluyut said.

University of the Philippines Los Baños professor Emmanuel Dumlao said concern for trees was but natural for poets like him. “When trees are cut, they are cutting you up, too,” he said.

The arts community reacted strongly against the P16-million road-widening project upon learning that 19 kapok trees (Ceiba pentandra) were felled in March.

The DENR stopped the project when it learned that the initial batch of trees were cut without clearance from the agency. This also prompted municipal Councilor Norvin Tamisin to sue Timugan village chief Florencio Bautista and a number of DENR and DPWH executives for abuse of authority.

In a separate phone interview, also on Sunday, DPWH Laguna second district engineer Joel Limpengco said he would hold consultations with stakeholders before taking any further action on the roadwork.