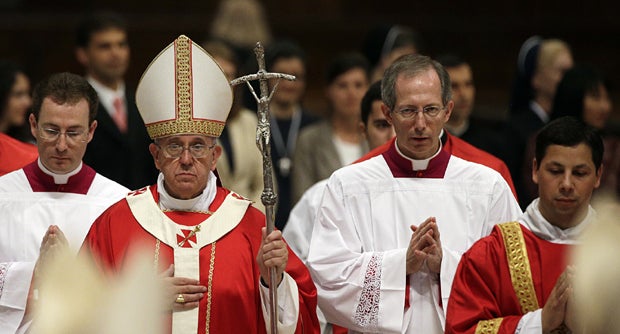 Pope Francis leaves after he celebrated a mass of Pentecost in St. Peter’s Basilica, at the Vatican, Sunday, June 8, 2014. AP

VATICAN CITY — Vatican officials insist no political agenda is lurking behind Pope Francis’ invitation to the Israeli and Palestinian presidents to pray for peace together in the Vatican gardens, and no concrete initiatives are expected.

But Sunday’s unusual summit — with Jewish, Christian and Muslim prayers intoned in the shadow of St. Peter’s Basilica — could take on great significance on the ground. And it will certainly enhance Francis’ reputation as a leader unhindered by diplomatic and theological protocol who is willing to take risks for the sake of peace.

The prayer was organized in the two weeks since Francis first made the surprise invitation from the biblical city of Bethlehem. On Sunday, he asked the crowd attending his weekly noon blessing to join in with their own prayers as well.

As Palestinian flags fluttered in the breeze, Francis pressed the importance of “surprise” in the Catholic Church, saying a church that doesn’t have the ability to surprise with its message of love is “weak, sick and dying and needs CPR.”

Francis showed himself a master of improvisation and surprise during his trip to the Mideast, stopping to pray at the Israeli security barrier surrounding Bethlehem and then, at Israel’s request, changing his busy itinerary to pray at a memorial to Jews killed in suicide bombings and other attacks.

But it was his invitation to Israeli President Shimon Peres and Palestinian President Mahmoud Abbas — two men who signed the Oslo peace accords in 1993 — to come to “my home” to pray for peace that captured imaginations and led to Sunday’s common call for peace on a patch of lawn inside the Vatican walls.

“Peace is a gift of God, but requires our efforts. Let us be people of peace in prayer and deed,” Francis tweeted on the eve of the summit. “Prayer is all-powerful. Let us use it to bring peace to the Middle East and peace to the world.”