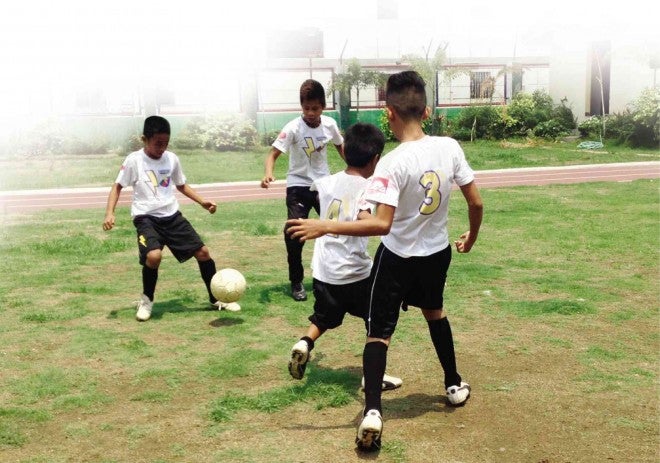 They may not be regulation size but World Cup dreams can start here, where aspiring youths now have a better training ground and no longer have to kick the football into a propped-up kulambo (mosquito net).

Navotas City hopes to sow the seeds of soccer mania on its own turf by developing not just one but two pitches—a milestone in a city that doesn’t have a lot of real estate to spare.

The two football fields are located inside the Dagat-Dagatan and San Roque elementary schools, and serve as playground for a ragtag team of indigent boys who picked up the game from French missionaries. 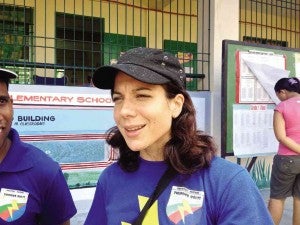 DUBOIS: It all started with friendship

For the young lads who call themselves the Dagat-Dagatan Thunderbolts, it was a welcome change from the basketball court where they used to hone their skills on concrete, injury-prone surface. Finally, they no longer have to play in another city just to feel the thrill of grass underfoot.

“It’s great because we no longer have to leave our community just to play properly. It’s also safer for us when we trip and fall,” said Gilbert Ponteras, 17.

“Our goals back then were also makeshift, made of wood and kulambo. We played with only slippers on or sometimes even barefoot. The only real football equipment we had was the football itself,” added a teammate, Jerico Aparicio, 14.

Still, the Navotas football fields are just about the size of a standard basketball court (way smaller than Fifa-prescribed dimensions). The one at San Roque Elementary School is also encircled by a running track.

But with these modest venues now ready, the search for new talents can commence in earnest through the city government’s newly launched football camp that targets the youth. The two host schools are also planning to have football as part of their Physical Education class.

“We have many basketball and volleyball courts, but these two football fields are a first in our city. We don’t have much space to build a full-size field, so we have to make do with these ‘mini’ (versions). What’s important is that the kids develop skills,” said Navotas Mayor John Reynald Tiangco, the football fan behind the whole project.

“We Filipinos can truly excel in football where height is not necessarily an advantage. We will be offering the sport to our young people as part of our sports camps, which in turn aim to lead kids away from vices like illegal drugs,” he said.

People who want to use the fields should just coordinate with the school principal and barangay (village) officials, who share in the task of keeping them in good condition, the mayor added.

Late last year, the Thunderbolts took to the San Roque field for the first time in a friendly match with the Gawad Kalinga-Smokey Mountain Football Club, a team similarly composed of boys from poor families.

The Thunderbolts were put together in 2012 by Elie Front, one of the French missionaries from Tahanang Puso, the local arm of a Catholic charitable organization based in France. The team members, the youngest at age 9, come from low-income households in Block 34, Dagat-Dagatan, Barangay North Bay Boulevard, where Tahanang Puso holds office.

Front, who is also an amateur football player in France, then decided to spread his passion for the sport among the kids, who easily caught the soccer fever. 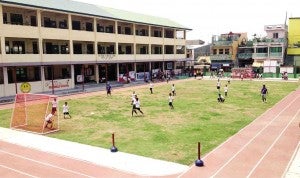 THE PITCH at San Roque Elementary School, one of the two football fields set up by the Navotas City government to attract local youths to the sport. NATHANIEL R. MELICAN

“I think they got into the game because of their friendship with Elie,” recalled Severine Dubois, another missionary who took over Front’s post in Dagat-Dagatan about a year ago and who now serves as one of the Thunderbolts’ coaches. “They really liked each other. But most of the time, the boys had nothing to do, so Elie decided to teach them football.”

What started out as a hobby for Fronts’ pupils eventually became a habit, with the fledgling team meeting every weekend to train and play in the morning or afternoon.

Soon enough, they found their first competitors in the Smokey Mountain team, who hosted their first few games in a Gawad Kalinga community in Tondo, Manila, because the Navotas boys still had no place to offer at that time.

For Dubois, the team still has a long way to go in the search for funding and sponsorship, but “having their own home turf now should make them realize that someone really cares for them. Maybe through this they can dream of something bigger not just for their game but also for their lives.”