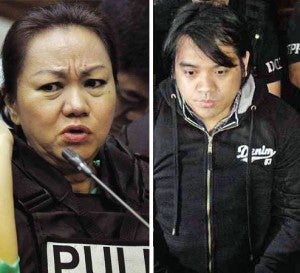 Janet Lim-Napoles (left) has asked Benhur Luy (right) to drop the serious illegal detention case against her, for which she has been under detention since August last year, sources privy to a meeting between lawyers of the two sides said on Tuesday. INQUIRER FILE PHOTOS

MANILA, Philippines–Janet Lim-Napoles has asked Benhur Luy to drop the serious illegal detention case against her, for which she has been under detention since August last year, sources privy to a meeting between lawyers of the two sides said on Tuesday.

The sources, who asked not to be identified for lack of authority to speak on the matter, told the Inquirer that during the meeting on Monday, Napoles’ lawyer, Stephen David, asked Luy’s counsel, Raji Mendoza, if Luy could drop the case against the businesswoman being heard in the Makati Regional Trial Court.

“It came up in the conversation and David also relayed to the lawyer that Napoles had a change of heart and wants to reconcile with Benhur and for him to drop the illegal detention complaint,” said one source.

Mendoza, contacted by the Inquirer, confirmed he met with David in the National Bureau of Investigation Special Task Force office, but said it “was a chance encounter and not arranged.”

Mendoza would neither confirm nor deny if the illegal detention case came up in the discussions. “We talked about the cases in general. All I could confirm was there was no deal,” Mendoza said.

“We believe that Napoles’ ultimate goal is to get out of jail and use all her unaccounted resources to be able to fight her battles as a free individual,” Mendoza said.

Mendoza said that during the conversation with David, the issue of the Napoles “red book”—a purported record of her Priority Development Assistance Fund (PDAF) transactions through the years came up. “David veered away from the red book issue but promised to ask his client about it,” Mendoza said.

In his Twitter account, Mendoza said, “JLN will not volunteer her own information or that contained in her red book.”

Mendoza also said that “a reliable source exposed that JLN got a copy of the Benhur files. Now they will tailor fit her affidavits to gain credibility.”

In earlier interviews with the Inquirer, Luy said: “I have long forgiven her, because that is the right thing to do. We are also relatives, but I will not drop the illegal detention case against her.”

The 31-year-old Luy had a parting of ways with Napoles, 51, his aunt and former employer, after he threatened to expose her alleged illegal activities concerning the P10-billion diversion of lawmakers’ PDAF allocations to ghost projects and kickbacks.

Napoles allegedly had Luy detained for three months, until he was rescued by agents of the National Bureau of Investigation in March last year from her posh condominium in Bonifacio Global City in Taguig. A warrant for Napoles’ arrest was subsequently issued by the Makati RTC.

She went into hiding, but surrendered to President Aquino in Malacañang on Aug. 28, 2013, saying she feared for her life. She is currently detained on this charge—not the plunder cases stemming from the alleged PDAF racket—at Fort Sto. Domingo, a police antiterrorist training camp in Sta. Rosa, Laguna.

Mendoza said that David’s reported announcement in a GMA 7 news interview that Napoles would return P2 billion of her purported earnings from the alleged PDAF scam in exchange for her turning state witness did not come up on Monday.

“It was not discussed during the meeting and if it’s true, it’s beyond P2 billion. It is not for her to say how much she should return. The amount should be determined by authorities after an audit of all her family’s cash assets and properties here and abroad, but she should still do jail time,” Mendoza said.

He also described David’s reimbursement announcement as a “legal maneuver.”

“Though we know it’s not for us lawyers of witnesses to say if she could be state witness or not, we could not adhere to the idea of her being one,” Mendoza said.

“Legal issues aside, JLN should come clean. Disclose her other hidden wealth that the AMLC (Anti-Money Laundering Council) has failed to freeze,” he said in his Twitter account.

Based on court records, on Dec. 19, 2012, Napoles ordered the detention of Luy after she learned that he was allegedly trying to make deals with her contacts behind her back and feared losing control of her pork barrel racket.

Luy was held in various properties allegedly owned by Napoles until he was rescued by an NBI team led by head agent Dante Berrou from a posh condominium in Taguig City on March 22, 2013.–With a report from Jerome Aning